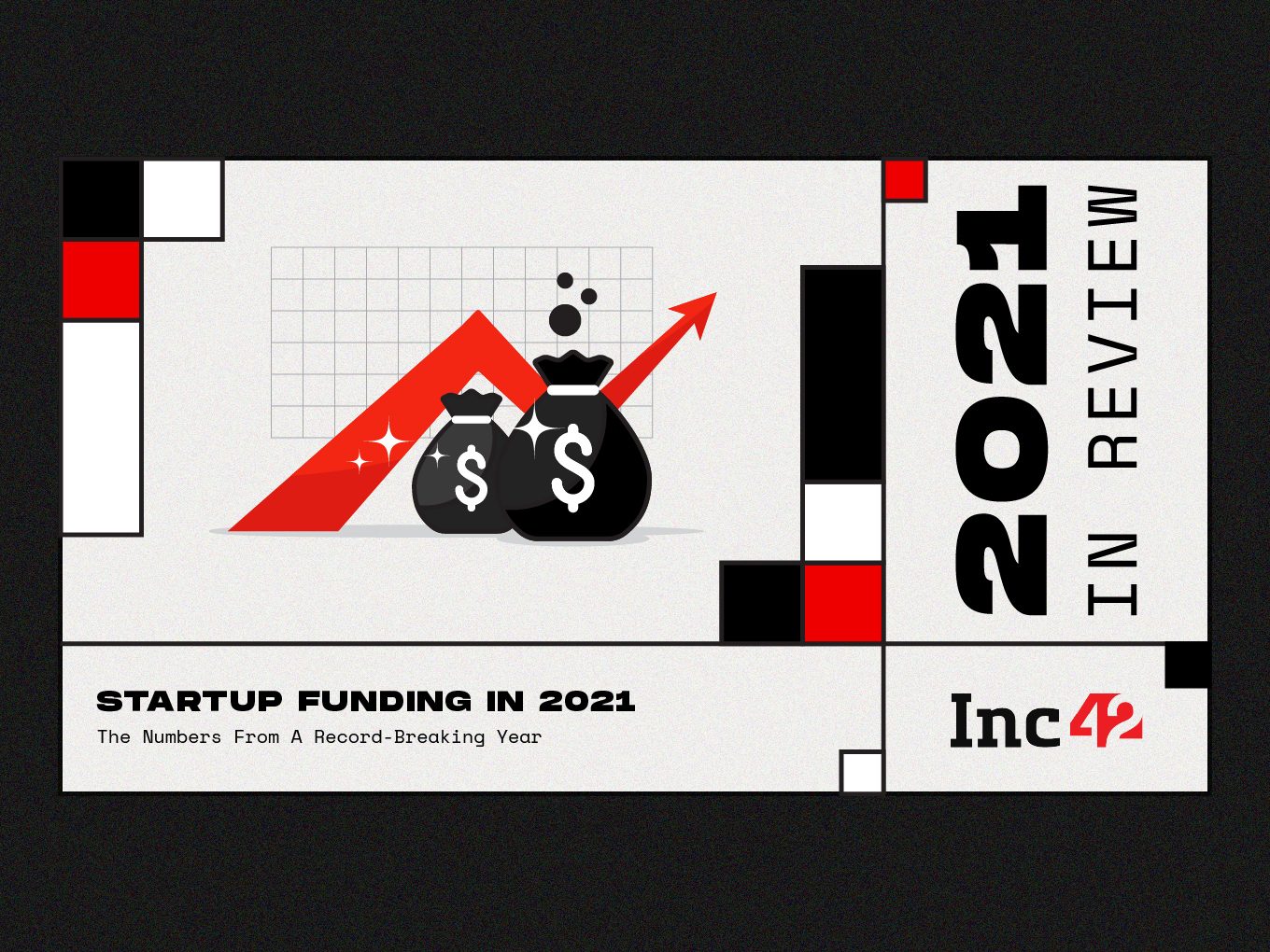 The funding secured by Indian startups in 2021 is comfortably higher than the total funding raised in the last three years combined ($41.4 Bn vs $37 Bn) and given that this is just till December 27, 2021, total could easily cross $42 Bn for the full year.

We have seen 42 new unicorns this year, and through IPOs, over $7.3 Bn was raised by tech startups. 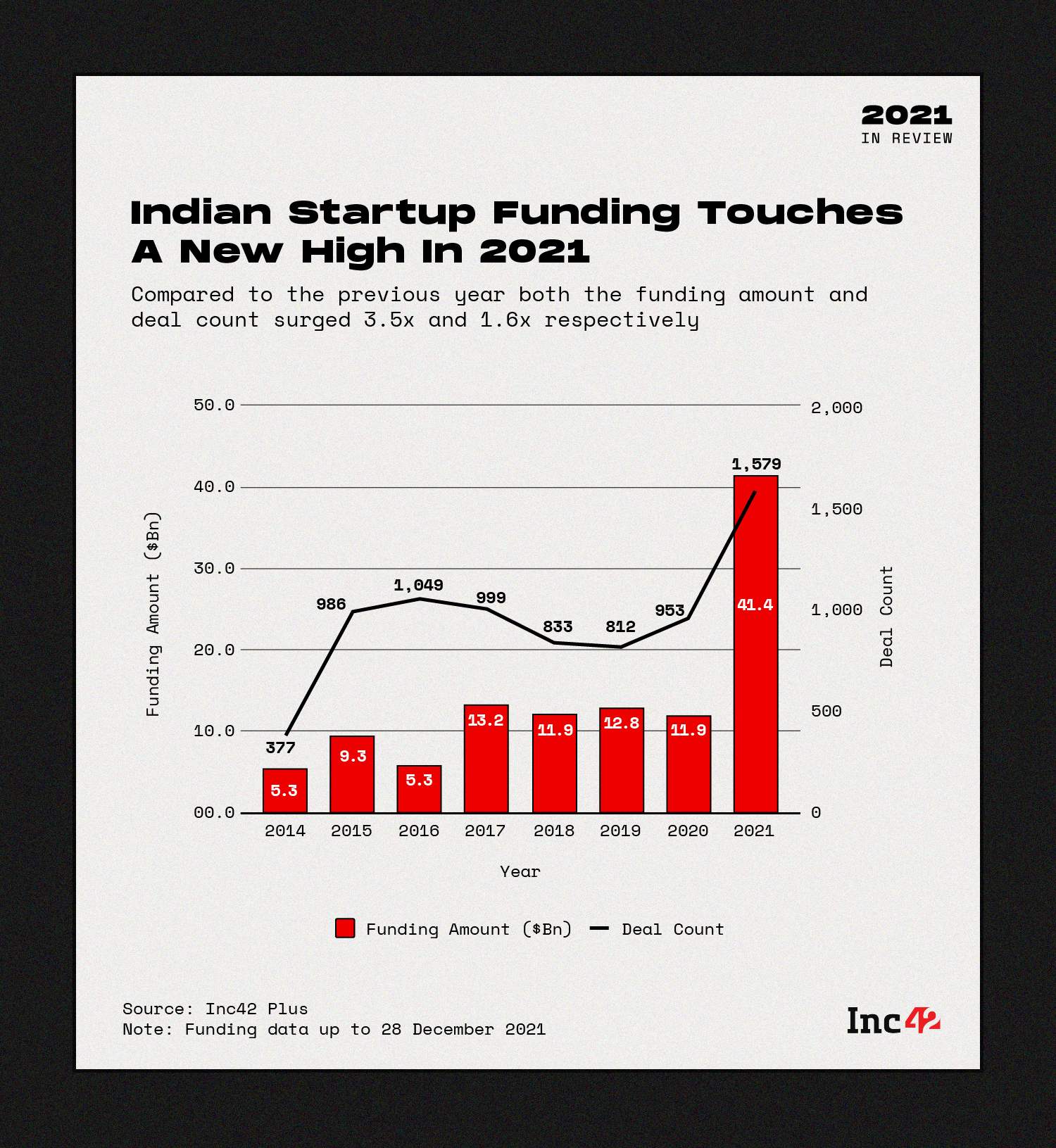 After an unprecedented pandemic in 2020, this funding boom has come on the back of higher global capital liquidity and inflationary growth across investment assets. It has been complemented by massive growth in the addressable base for consumer and B2B tech startups.

Besides this, the emergence of new models such as ecommerce roll-ups or D2C platforms, neobanking, social commerce and quick commerce have revitalised funding in many of the sectors which were moving towards consolidation. A further push came from pre-IPO mega rounds and anchor investments, through which startups raised more than $2.7 Bn.

In terms of the number of deals, fintech and ecommerce were neck and neck, but when it came to the funding amount, ecommerce came out on top with a huge margin. 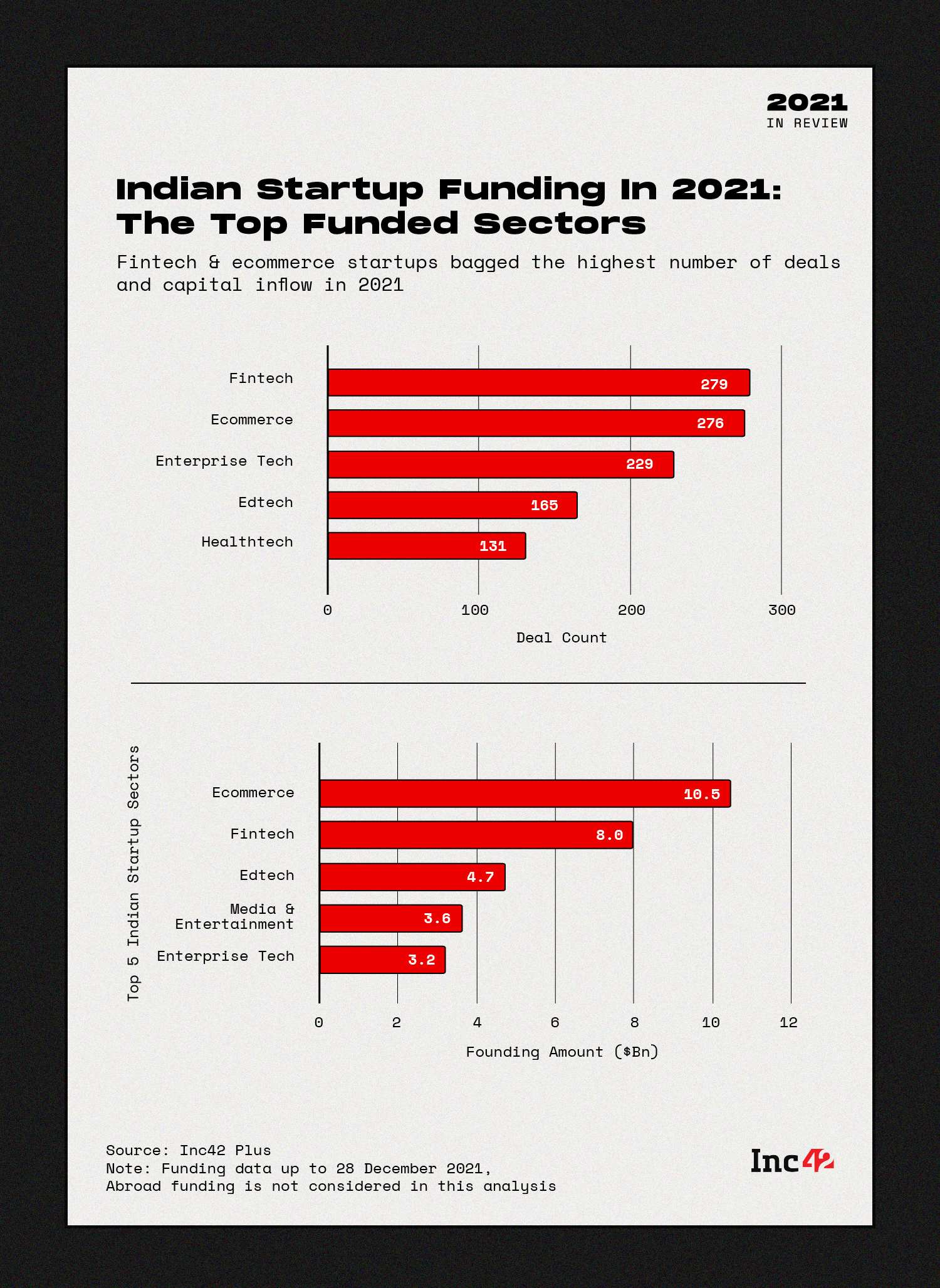 The fintech sector saw 11 new unicorns this year with the first two crypto startups entering the unicorn club. In one of the largest fintech deals in India, Pine Labs raised $985 Mn from Baron Capital Group and Duro Capital to push fintech ahead of other investment-heavy sectors like edtech, and media and entertainment. 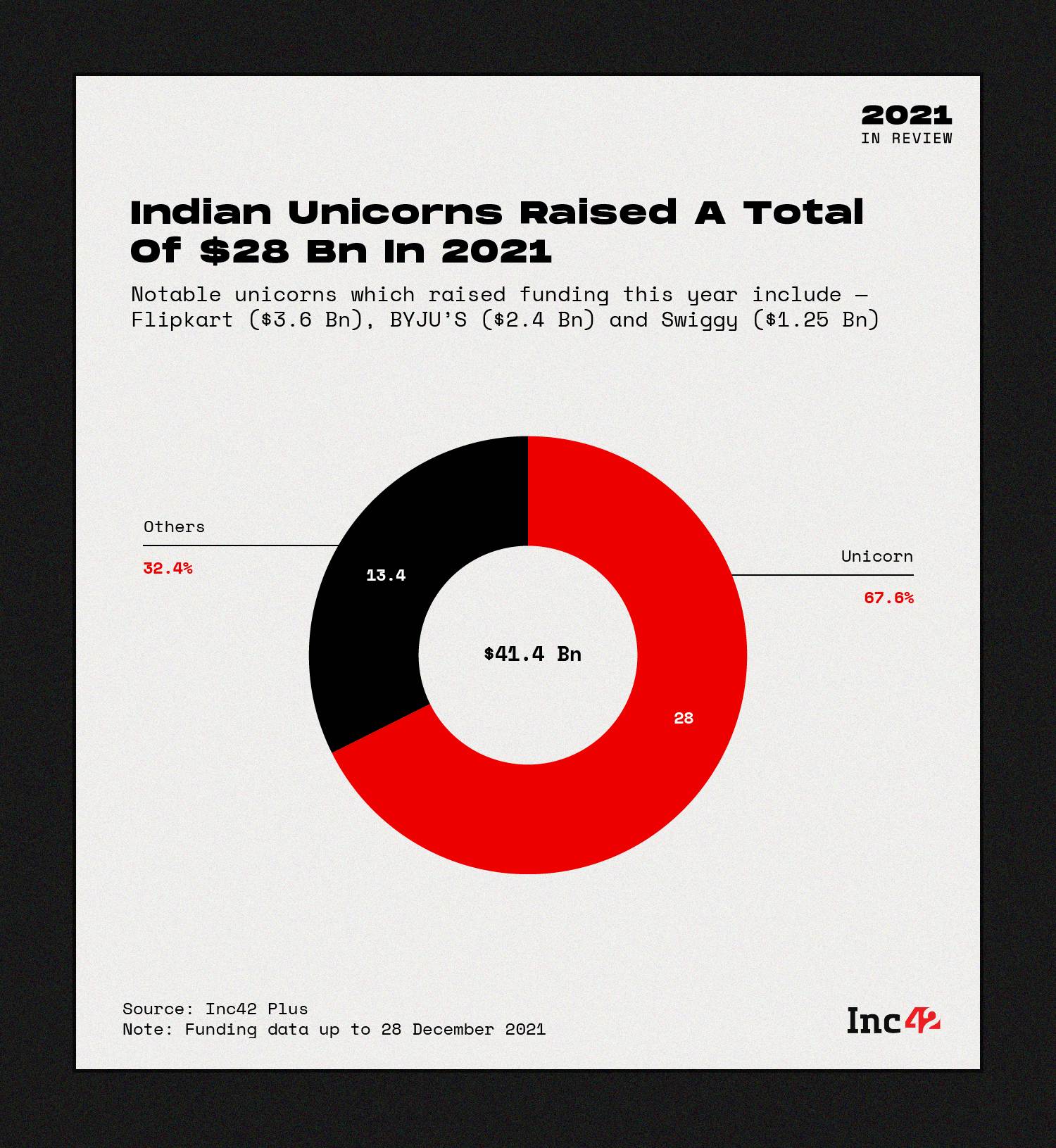 Another record is the number of mega deals with 107 individual funding rounds over $100 Mn, which comes up to just 8% of all deals this year.

Despite their low share, it is noteworthy that high-value mega-rounds were a major contributor to the overall funding boom. Nearly $30 Bn was raised through mega deals, with an average mega ticket size of $280 Mn.

Excluding such outliers, the total funding poured into Indian startups stood at $12 Bn for 2021. So just 8% of deals accounted for 72% of the funding amount. This is significantly higher than any past year in our recorded data. 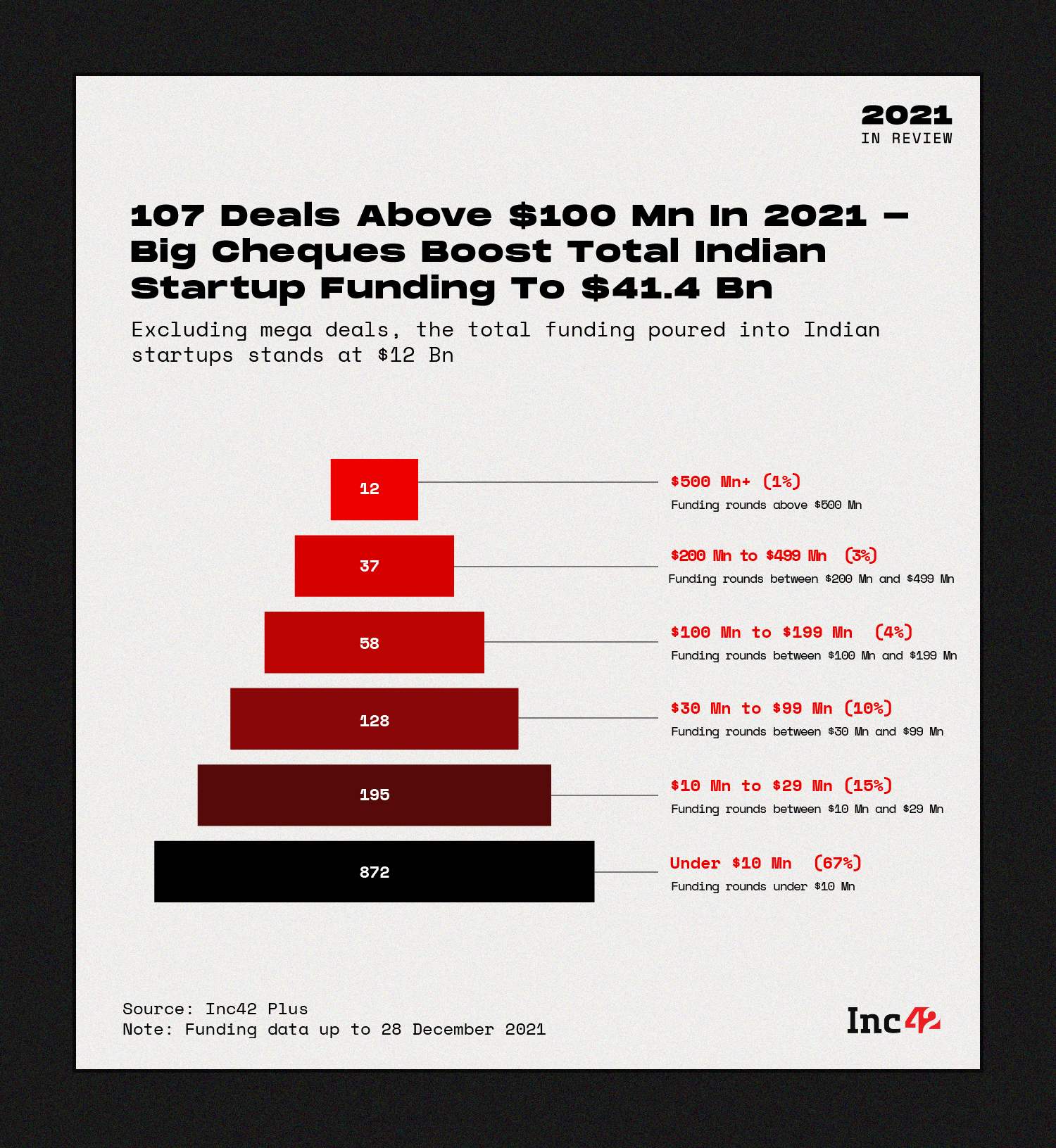 A whopping 67% of all deals were for under $10 Mn, which is understandable given the surge in seed and bridge funding.

We will dive further into this analysis in our annual tech funding report, which will be released in the first half of January 2022.

While there was a clear uptick in funding across all stages, the total capital poured in at the growth stage recorded the biggest surge (290%) followed by late stage investments which rose by 246% from 2020. In terms of deal count, bridge and seed stage deal count surged 86% and 80% respectively, from 2020 to 2021. This indicates higher inflow of capital for early stage startups where these rounds are more common, and is a significant indicator of market maturity. The total number of bridge and seed stage rounds (942) was almost the same as the total deals across all stages (953) last year. 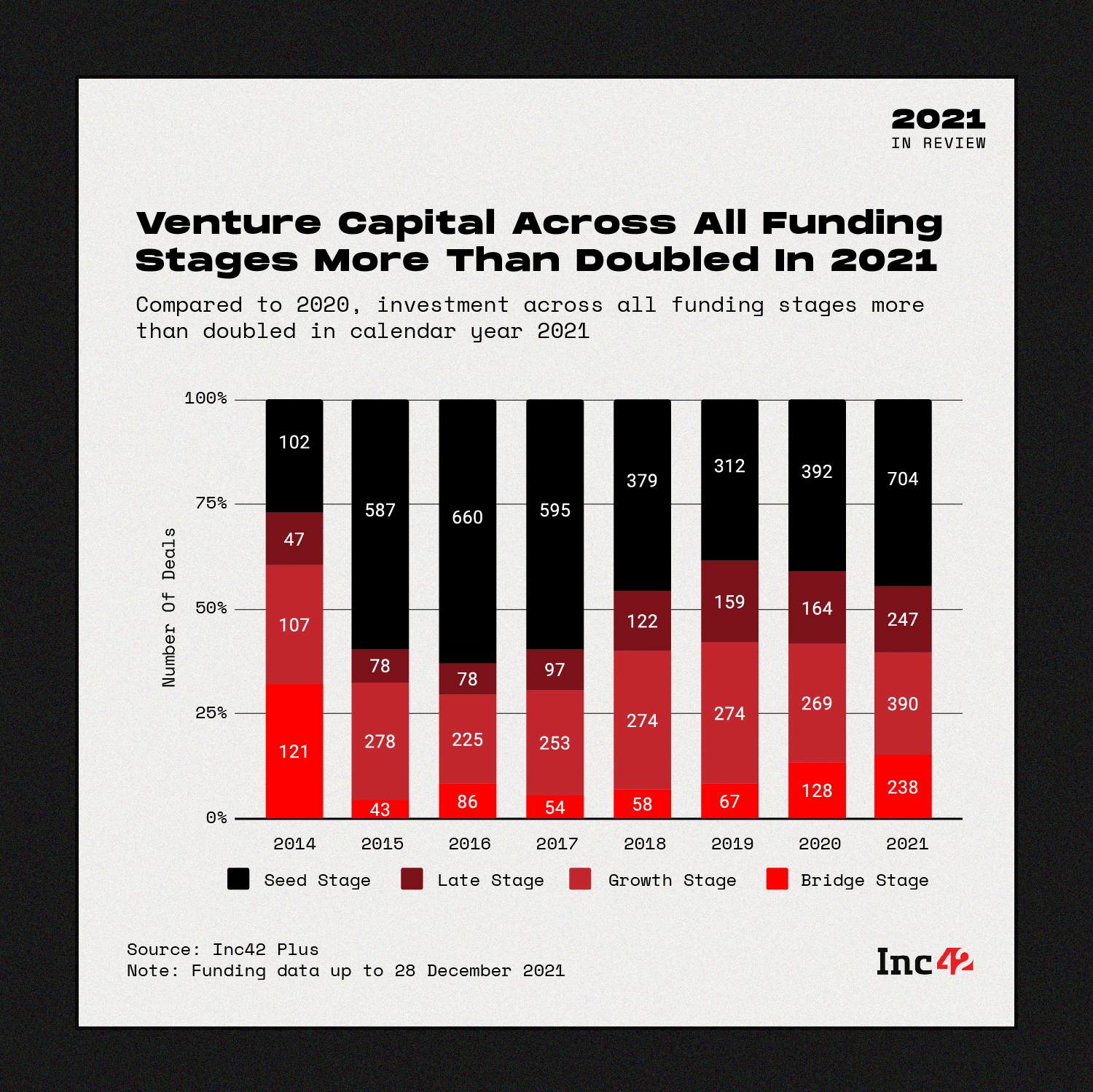 In 2021, uncertainty in the market has given way to liquidity and optimism among investors. Investor participation was at an all time high in 2021 compared to 2020 with the unique investor count surging by 123% from 1,114 unique investors recorded last year to 2,487 this year. Overall, $6.2 Bn has been raised by 62 new startup funds from their limited partners across categories. A91 Partners closed its second fund at $550 Mn (INR 4,095 Cr) in November this year to top the charts for new fund launches. 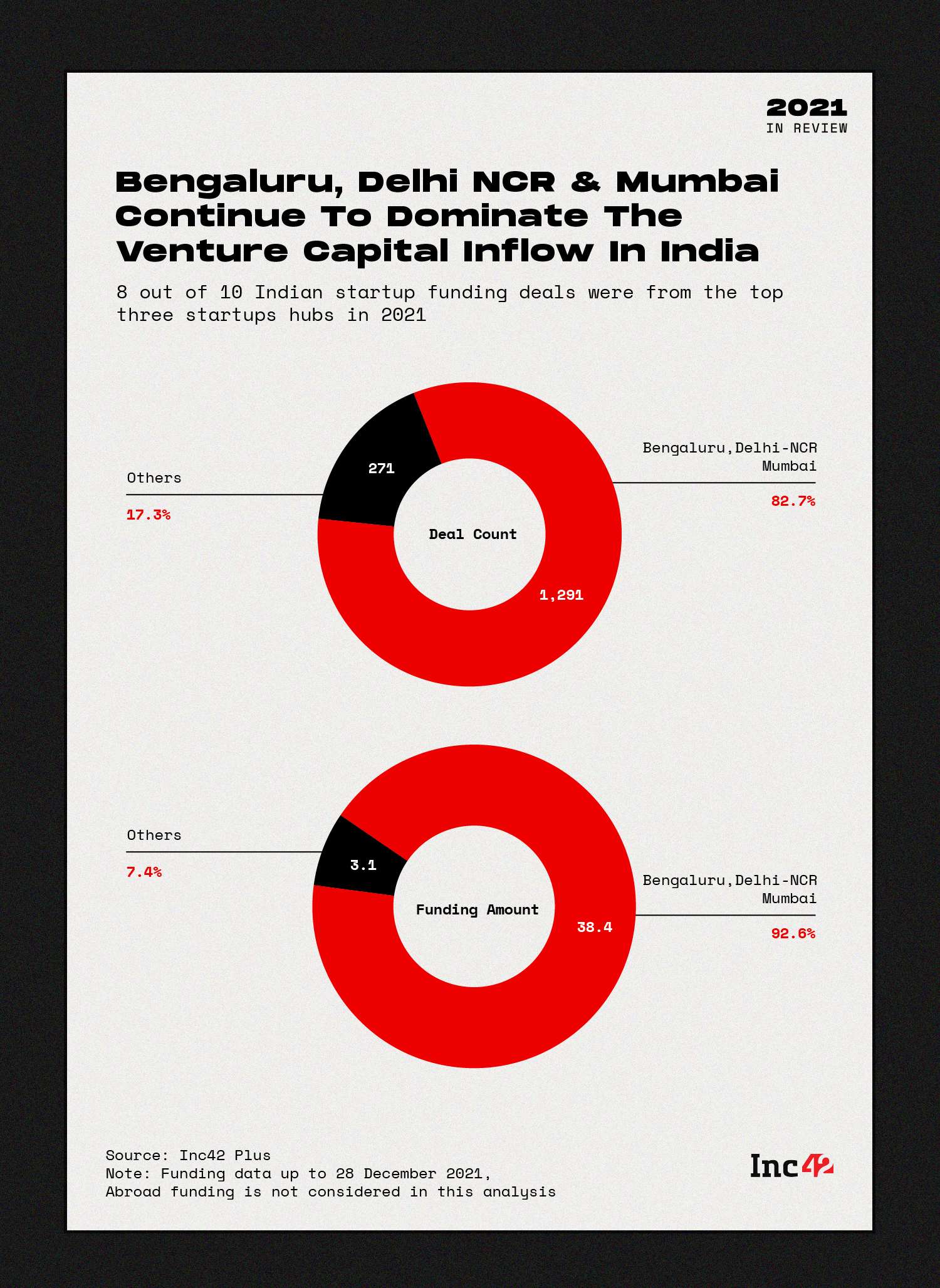 A more detailed analysis of the hub-wise investment as well as other key indicators of the startup ecosystem will be available soon in our annual tech startup funding report in early 2022. Watch this space for more.