Every ordinary citizen in 2020 was gravely waiting for the year 2021 to come, with a hope that it would put a stop to the pandemic. And entrepreneurs across the world were apprehensive that they might have to shut their shops due to the many lockdown-induced challenges along with cash crunch.

However, within the first four months, the cloud of doubt looming over the Indian startup ecosystem was effaced as the Indian ecosystem managed to pick $6.97 Bn, giving rise to over eight unicorns.

Fast forward to the last week of December 2021 and the number of total unicorns produced by the country is 42; the highest ever recorded in the country. This too placed India among the top three unicorn producers of the world!

Undoubtedly, the year 2021 was a remarkable year for the Indian startup ecosystem. Not just because we saw massive fund raises, tech startups heading for public listing, or the highest number of Indian startups crossing the billion-dollar valuation mark but also because Indians gradually embraced the new age technology by coming out of their traditional cocoons.

Indians became more comfortable with buying, learning, socialising and everything doing online-giving a surge to the growth of tech-based Indian startups rolling out tailor-made offerings. This is one of the core reasons that made venture capitalists and PEs invest higher this year.

For instance, during the festive season sale of 2021 (Diwali), as per a Redseer report, indigenously developed ecommerce giant Flipkart saw its customer count grow by 20%, mostly from Tier II and beyond, helping it clock $4.6 Bn in GMV and grab 64% of the market share.

In the B2B space, social commerce platform Meesho claimed that it has seen a surge in user base by 750% during the festive season mostly riding on the back of Tier IV and beyond.

In this article we will not be discussing the higher adoption rate of products offered by Indian startups; but will try to decode the new class of Indian unicorns, where they are coming from — including sectors and locations, among others.

Precisely, the Indian unicorn club currently has 84 startups, of which 42 were minted this year. Meaning, overall, 50% were minted in the current year alone!

India Produced A Unicorn Every Nine Days In 2021 The year 2021 saw several segments producing unicorns for the first time. These include:

In 2021, the fintech sector dominated almost in all aspects— including funding, number of deals or unicorns produced. The segment created a total of 12 unicorns with Digit Insurance, Acko Insurance, Slice, Cred, Groww, among others. Fintech sector recorded $7.4 Bn funding in 2021, and marked 260 deals, the highest in the year.

Next star sector of the year 2021 is ecommerce. It produced the second-highest number of unicorns with 10 startups crossing the billion-dollar valuation. It started with Moglix, a B2B marketplace, then came Infra.Market, another B2B marketplace platform, followed by Licious, IPO-bound Droom, among others.

Third is the enterprisetech and consumer services sectors producing four unicorns each. With Bengaluru termed as the Silicon Valley of India, the location produced the most number of unicorns this year. The city, which is home to the country’s first unicorn InMobi produced 17 unicorns this year. Some of the startups that crossed the billion dollar valuation mark this year and further doubled its valuation include CRED, Meesho, ShareChat and Zetwerk.

The second in the spot was the national capital Delhi-NCR region, which saw the making of 13 unicorns. Spinny, OfBusiness, BharatPe, and GlobalBees were among the major names which achieved unicorn status in 2021 from this region.

While the financial capital Mumbai saw eight unicorns from three in the previous year, its neighbouring city Pune too produced two unicorns. So, in total, the region produced 9 unicorns, making the region finally getting a place in the list of unicorn producers in the country. 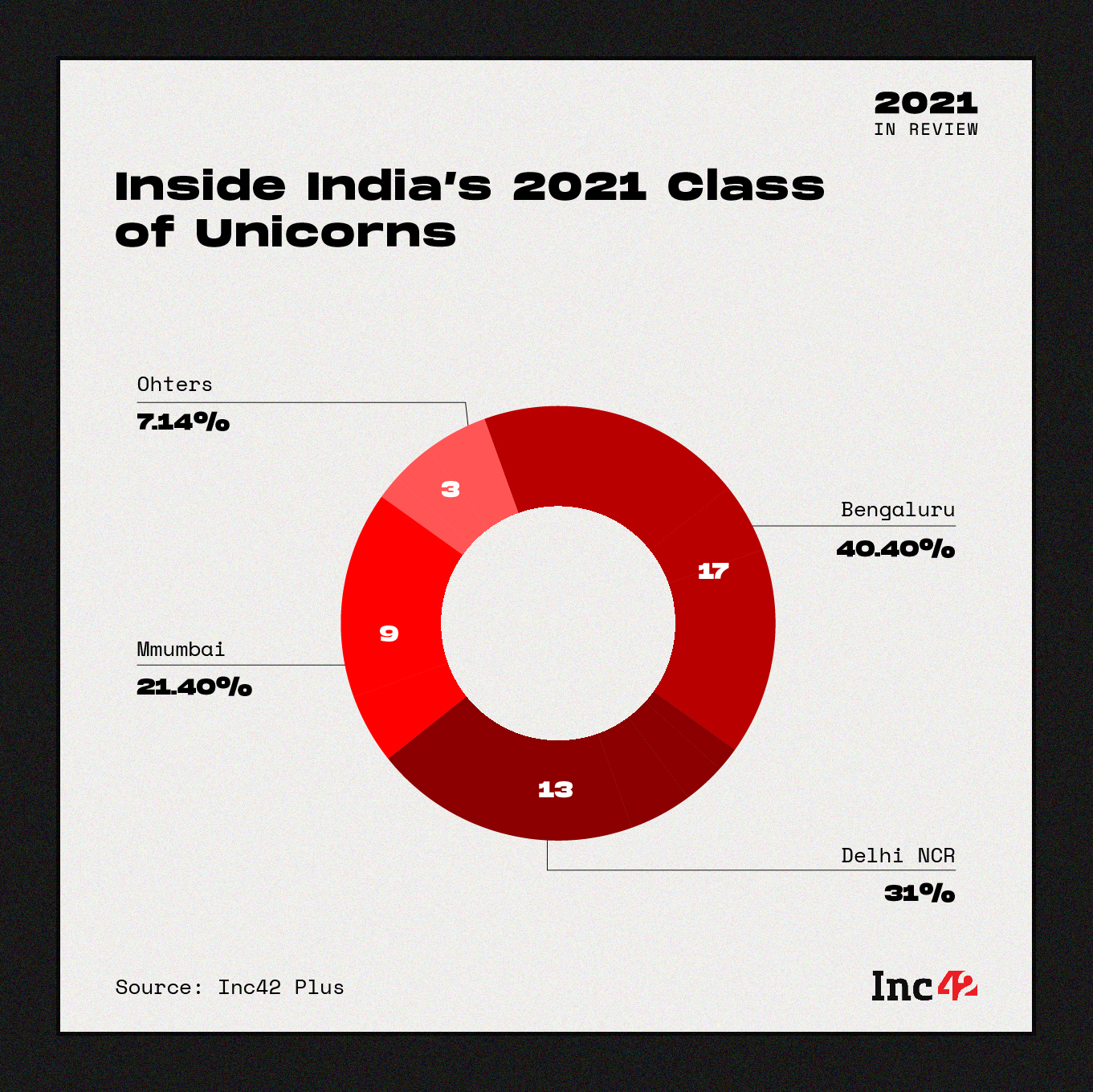 Where Is The Next Brigade Of Unicorns Coming From?

If we talk about unicorns produced in India from various sectors to date, ecommerce and fintech sectors are on top with 20 unicorns each, further proving that Indians prefer to order and pay online. Digging deeper into the ecommerce sector, social commerce, quick commerce along D2C models have played a crucial role in shaping up the overall sector in the year.

In the fintech space, lendingtech has witnessed a significant boost in the customer base, as more customers avoid opting for conventional bank loans.

Moving on to 2022, as per our analysis of 68 upcoming startups who are about to hit the billion dollar valuation, we estimate that India will see close to 20 new unicorns rise from the fintech space, 13 from the ecommerce sector, and 7 from media and entertainment sector.

In terms of locations, Bengaluru will see adding 26 to its name, Mumbai will get 18, and Delhi-NCR is expected to witness a rise of 13 unicorns.

Overall, if we talk about 2022, looking at this pace we would add over 50 Indian startups to the unicorn club! The next year will be more about celebrating decacorns instead of just unicorns!