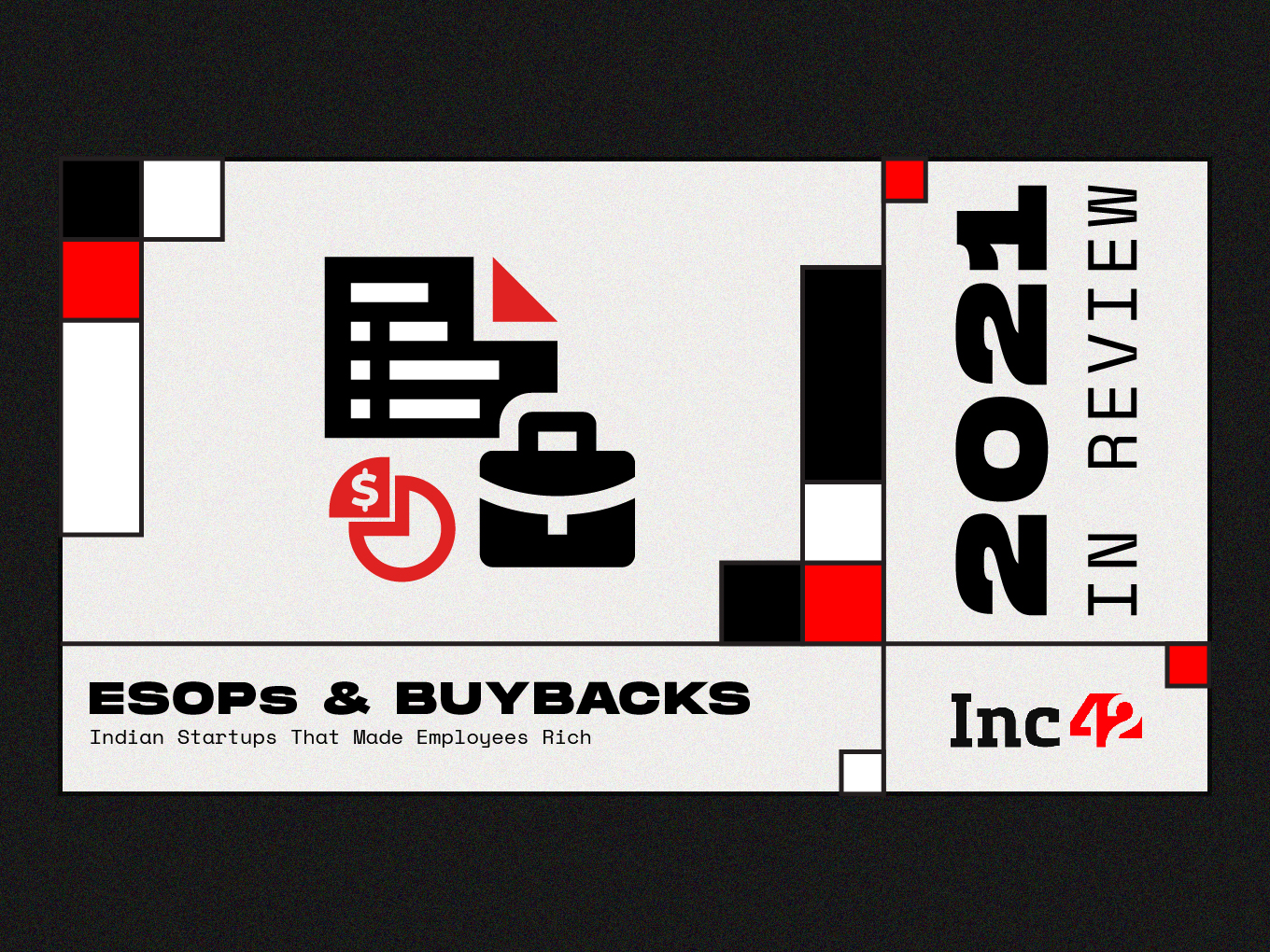 With the influx of billions of dollars, the Indian startup ecosystem is on a roll for sure. To give an example, until the first week of December this year, Indian startups have raised a total of $39 Bn, a 225% rise from $11.8 Bn in 2020.

The year has also seen 40 unicorns spread their wings, a record only created to be broken the next year.

With all this capital and growth, the year has also seen the beginning of the great resignation era, and so on the crazy fights amongst startups for acquiring talent, which at some point also ended up VCs playing the mediator.

Yes, talent is what matters!

Until now, the higher the CTC (cost to the company) a startup was willing to offer, the higher were the chances to attract potential talent. However, now the metrics have changed. Employees are looking beyond their salaries. This is why we have seen startups such as BharatPe handing out BMW bikes, and Dubai tickets as part of its CTC for new employees. We can find another example here in social commerce startup Meesho–offering 10 days off after a busy Diwali sale.

While freebies and other valuable employee benefit programs excite the potential talent for a brief period of time, the opportunity to create wealth can act as a deciding factor to whether to join a particular firm. ESOPs or Employee Stock Ownership Plan is a prime way to create wealth and employers understand this.

To give an example, One 97 Communication, the parent company of Paytm ahead of its much anticipated IPO expanded its ESOP pool to a whopping $604 Mn, the largest in India. Even, ecommerce giant Snapdeal ahead of filings its INR 1,250 Cr IPO has also increased its ESOP pool by 151%.

At a time when startups are mushrooming at a never seen pace, employers are chalking out different strategies to hire and retain talent by offering them a piece of the startup through ESOPs. 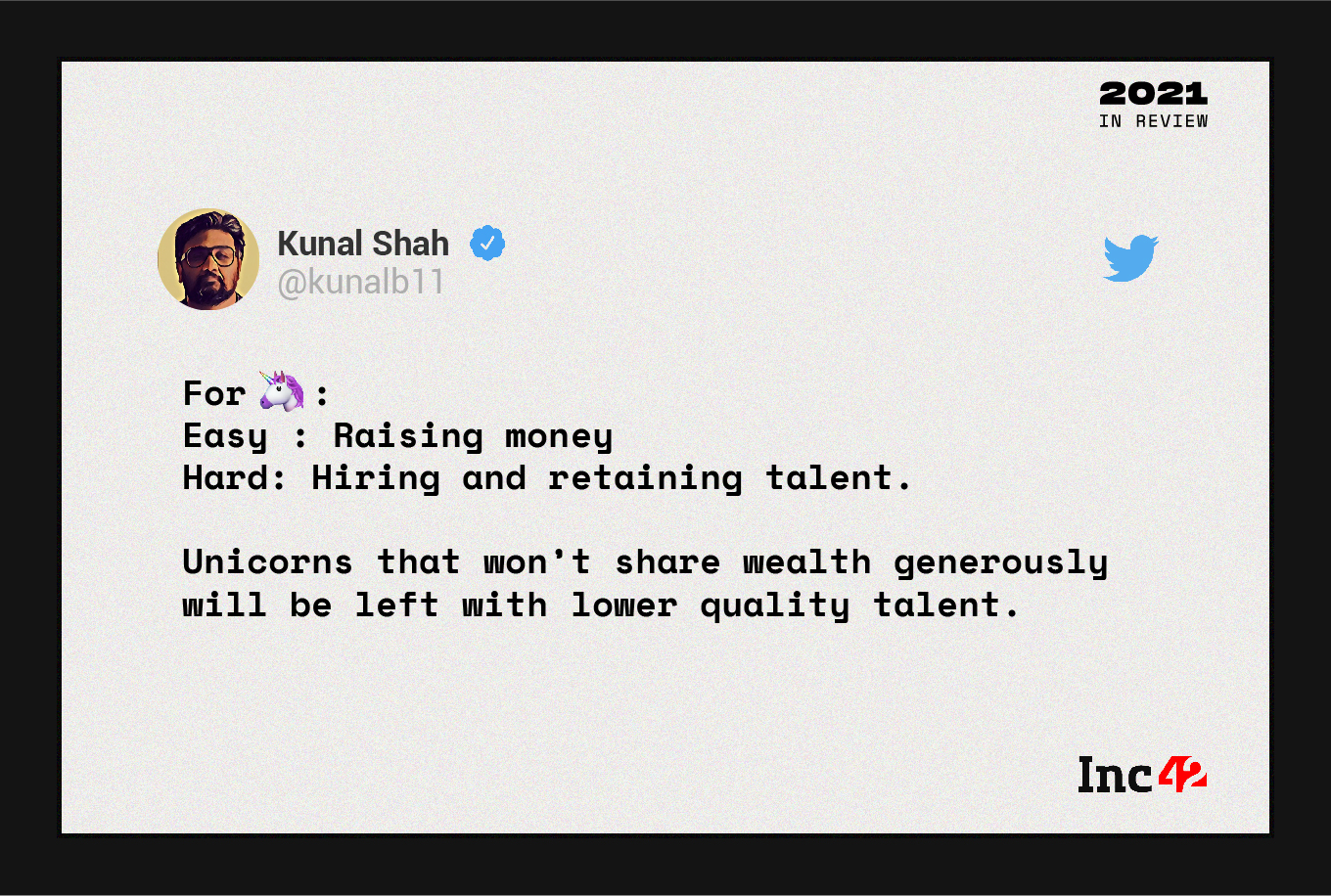 More or less everyone agreed with Kunal Shah on this!

With more than half a dozen startups getting listed and creating millionaires through vested stock options via ESOPs, the importance of ESOPs is eminent. While 2020 was about giving ESOPs, 2021 became the year of buybacks with more than two dozen startups opting for it.

We even saw Indian startups changing the mechanics of traditional ESOPs to make them more inclusive in nature. For example:

As we head into 2022 with still a high employee attrition rate, more and more startups are likely to brainstorm and come up with more innovative ways to incentivise their employees through ESOPs.

And hence, as part of our annual 2021 In Review series, we decided to take a look at how ESOPs are actually enabling employees in creating wealth.

In 2021 alone over 29 startups officially announced their ESOP buybacks and created a wealth of more than $335 Mn for their employees. Walmart-backed ecommerce giant Flipkart announced the biggest ESOP buyback with $125 Mn in 2021. The news came on the heels of it receiving the largest funding of 2021 worth $3.6 Bn, with its former investor SoftBank chipping in after making an exit in 2018.

Then, Flipkart CEO Kalyan Krishnamurthy told employees, “This year we are pleased to announce a buyback of 5% of the past three years’ vested options…. With this landmark event for us, I am happy to share that we are offering our employees an additional buyback of 5% of all vested options as we stay committed to wealth creation for you.”

Another startup ESOP story is of enterprisetech startup BrowserStack. It took the second slot after announcing its ESOP buyback plan worth $50 Mn.

In a tweet thread, Kamath said, “Everyone holds ESOPs & continuously gets new options too. We ran a buyback last year at $1 Bn valuation and we will this year at $2 Bn. Maybe conservative valuations, but our business risks are high. Personally, the proudest moment in this journey.” The year also saw B2B marketplace Udaan, ShareChat and PhonePe conducting the ESOP buybacks worth $23 Mn, $19.1 Mn, and $17.7 Mn respectively. These were followed by CRED which conducted two ESOP buybacks of a combined value of $14.2 Mn in the current calendar year.

Razorpay, Chalo, Khatabook, and Unacademy also opted for ESOP buybacks to the tune of $10 Mn each.

While buybacks are definitely something that gained a lot of prominence this year, there is no denying the fact that the IPOs of new-age tech startups in 2021 has also vouched for the significant role ESOPs offer for wealth creation.

Be it Chennai founded and NASDAQ listed Freshworks’ $100 Mn IPO which made 500 employees millionaires or ecommerce giant Nykaa’s stellar listing, which built massive wealth for its key managerial people (KMP). The year 2021 had plenty of such success stories.

Falguni Nayar-led FSN E-Commerce which operates the popular fashion ecommerce marketplace Nykaa made a stellar debut last month in the domestic market. Not only has the startup given hefty returns to its investors, but also has shattered several stereotypes associated with private companies.

Girish Mathrubootham-led SaaS unicorn Freshworks which went public in September this year created more than 500 crorepatis (millionaires), as around 76% of the employees held shares.

“It’s not just for the founders to get rich or the investors to get rich…as we continue our public journey, there is a massive opportunity for us to create a life-changing impact for many employees and people who believe in our mission,” Mathrubootham said.

Ahead of Paytm’s listing, Inc42 had exclusively reported that Paytm had distributed equity shares worth INR 529 Cr to its over 200 former and current employees upon ESOP conversion.

PharmEasy, another IPO-bound startup had created an ESOP pool of $78 Mn for its employees.

Kunal Bahl’s Snapdeal which is heading for a $200 Mn-$250 Mn public offering has also increased its ESOPs pool by 151% from existing 1,98,890 to 3,01,110 options to provide an opportunity to its employees to generate wealth.

Following these trends and realising that salaries are not the only way in generating wealth, more and more employees are aspiring ESOP options from their current organisations or trying to add them in their offer letter as they land in their next employment.