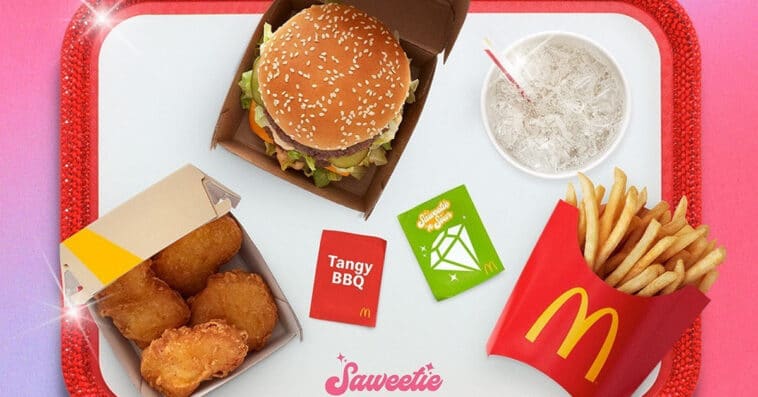 McDonald’s has announced a new partnership with American rapper and singer Saweetie for its latest celebrity meal. The fast-food giant is known for its ‘famous orders’ promotions. The collaboration meals are known to boost the sales of the company. Under the latest collaboration, the company will launch ‘Saweetie Meal.’ The meal will be available across all stores in the United States from August 9. The main attraction of the meal would be Big Mac and four-piece Chicken McNuggets. Along with, there will be medium fries, a medium Sprite, and BBQ sauce. The sauce has been renamed as “Saweetie ‘N Sour” in honor of the meal.

Inspired by the look of the “Icy Grl” famed artist, the fast-food company has created ‘icy new packaging’. Saweetie has been a popular face in the United States and leaped to fame with her song ‘My Type’ which went viral in no time. The song has over 120 million views on YouTube. The singer is quite a sensation on social media platforms and has more than 12 million followers on Instagram. Saweetie has nearly 17.5 million monthly listeners on the audio streaming platform Spotify. McDonald’s has been reaping the benefits of these collaborations under its ‘famous orders platform’ since its debut.

The collaboration adds a new name to the ‘famous orders.’ This creates a buzzy meal without any extra effort as it just takes some rearranging of existing items available in the menu. As fast-food chains like McDonald’s operate on razor-thin profit margins, these promotions give companies an edge. The company recently said that its sales have climbed and it credited the BTS Meal for it. The company said that collaboration with the K-pop band resulted in a 25.9 percent growth of same-store sales at US restaurants. The performance is beyond expectations as it beats the expectations of several analysts. Chief executive officer Chris Kempczinski said that the collaboration resulted in an increase in sales of McNuggets. Earlier to this, the company had partnered with artists J Balvin and Travis Scott. Such was the popularity of the Travis Scott meal that several stores ran out of it.