Home / Amazon Vs Flipkart: Who Led The Indian Ecommerce War In 2021?

Amazon Vs Flipkart: Who Led The Indian Ecommerce War In 2021? 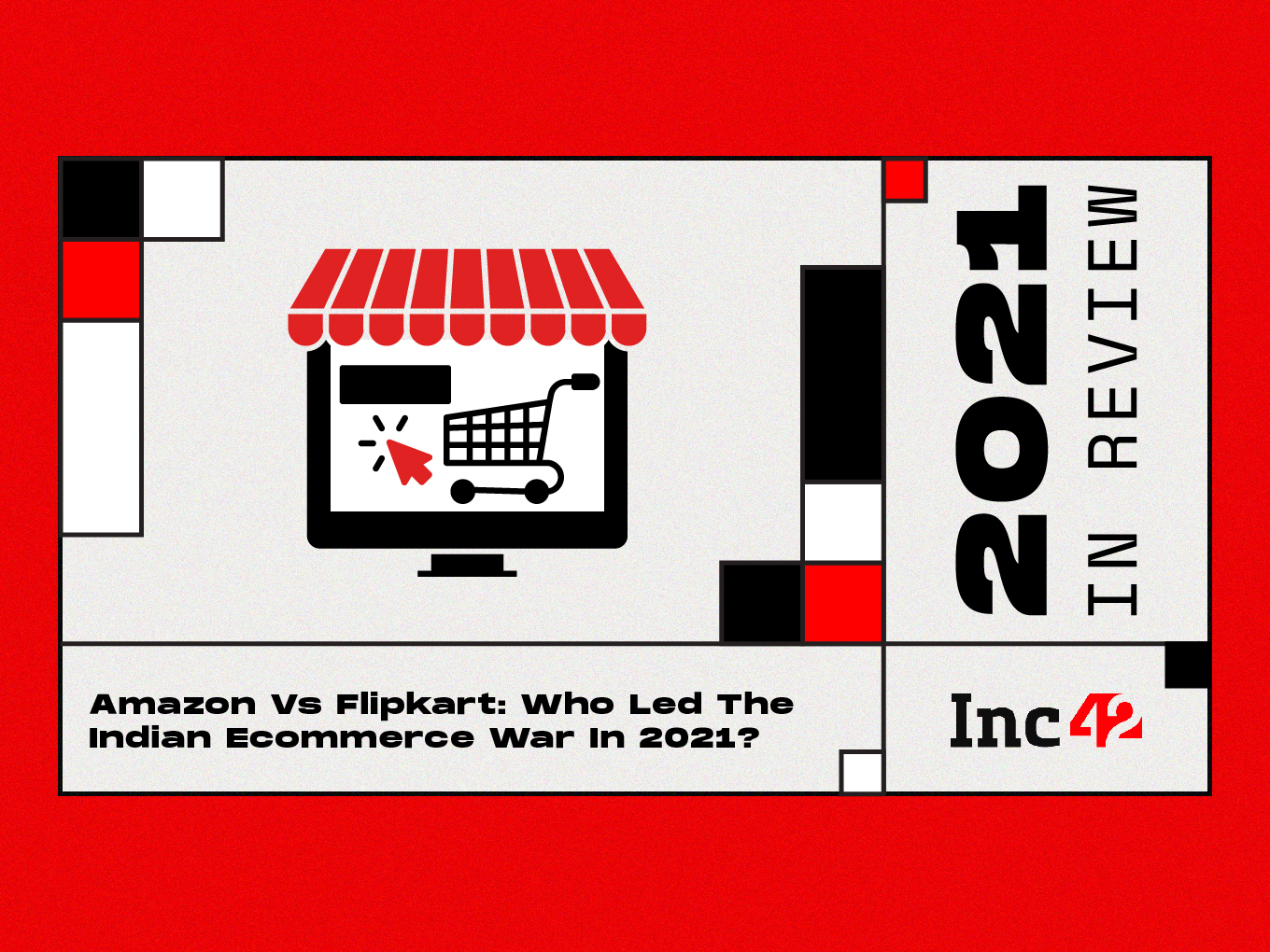 Although traditional brick-and-mortar retail still calls the shots in India, accounting for 93% of a $1.2 Tn market, ecommerce has witnessed a huge upsurge over the years, touching every nook and cranny not reached by physical retail. The rise of the marketplace behemoths, Amazon India and Flipkart, to be precise, has also given consumers access to the widest possible spectrum of products.

An overarching digital payment ecosystem has further fuelled online shopping. And the ‘pandemic boost’ has filled its coffers as never before in the past two years. Going by the accelerated adoption, a report by Inc42 Plus estimated that India’s ecommerce market would cross $200 Bn by 2026, growing at a CAGR of 19%.

Understandably, the flagship events — the online festive sales held every year — tend to push ecommerce to its peak as Indian consumers are always keen to leverage the whopping discounts on offer. In the 2021 festive season, ecommerce sales saw a 23% jump in gross merchandise value (GMV) and clocked $9.2 Bn compared to $7.4 Bn recorded in the previous year.

The largest Indian ecommerce giants — Amazon India and Walmart-owned Flipkart — have always locked horns in a cut-throat battle for supremacy in the country, and there is no better occasion to flex their muscles than the big fat Indian festive season.

This year, Flipkart’s 7th edition of The Big Billion Days (BBD) Sale and Amazon India’s 4th edition of The Great Indian Festival (GIF) were originally planned for October 7 and October 4, respectively. But both kicked off on October 3, underlining the intensity of the battle royal to grab the largest chunk of online shoppers. In fact, both companies changed the dates multiple times to gain the upper hand and get more bargainers, aka online shoppers.

During the festive sales 2021, the Flipkart Group (Myntra and Flipkart) emerged as the leader in gross merchandise value (GMV), capturing 62% of the market share, a report by RedSeer said. 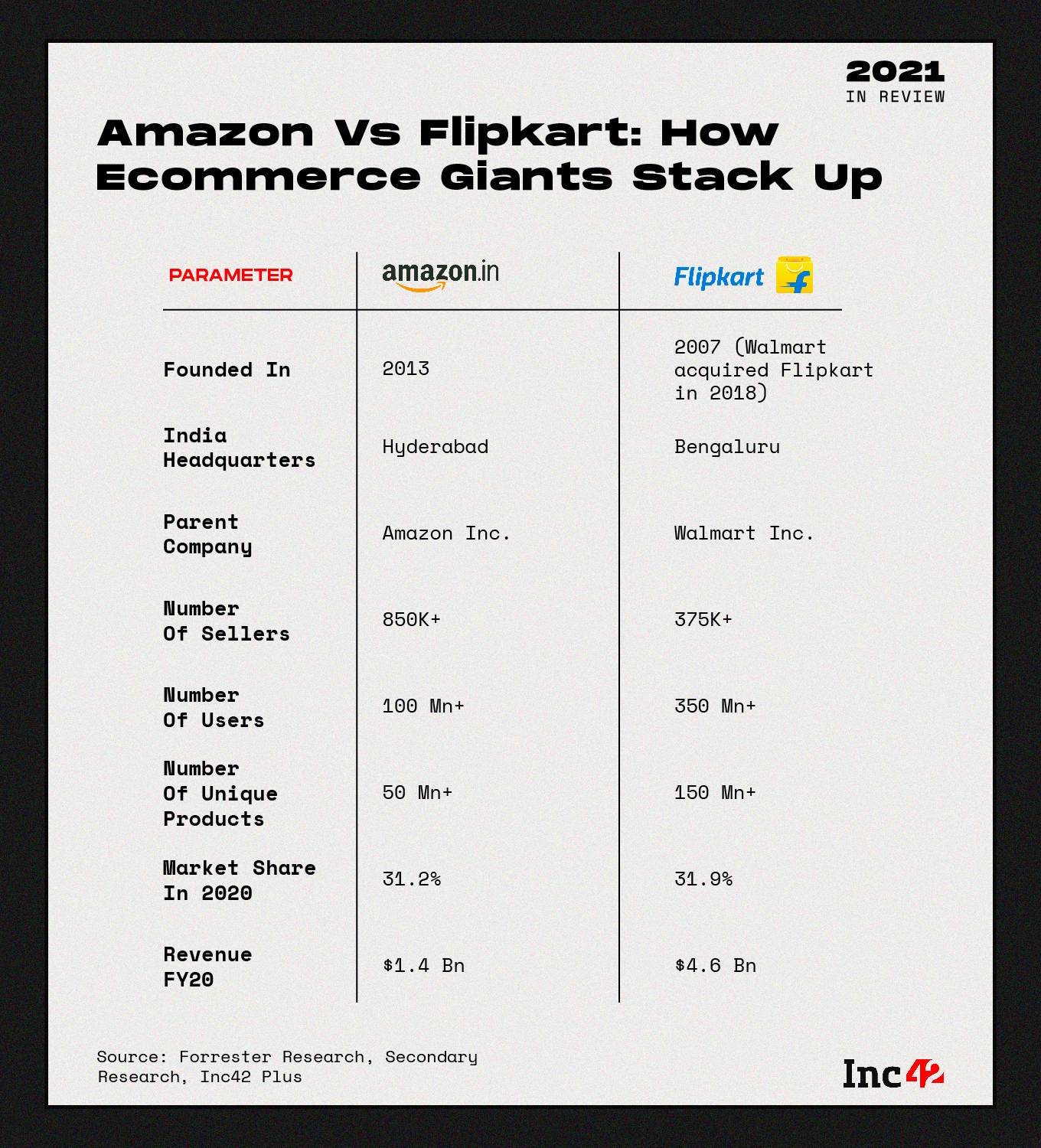 The presence of the Big Two in the Indian market has made the industry extremely competitive as both have entered the private label business to bolster sales, introduced unique features and value-added services and expanded to specialised segments to bump up their businesses.

Flipkart Group has been quick to diversify across the ecommerce space, and its group companies include Flipkart (core ecommerce), Myntra (fashion ecommerce), Flipkart Wholesale, Flipkart Health+, Cleartrip (OTA), Shopsy (social commerce) and a majority stake in the payment app PhonePe.

They are also aggressively competing to enhance operational procedures, be it fulfillment centres, logistics or technology.

In brief, the Indian ecommerce space is currently witnessing a duopoly of sorts, although the 2021 festive sales saw a bigger number of homegrown players like Tata CLiQ, Reliance and Meesho trying to make an impact.

However, in this article, we will only focus on the Big Two and their performances from customers’ perspective. As part of the 8th edition of our annual 2021 in Review series, Inc42 partnered with AppTweak to understand how these ecommerce giants fared in terms of downloads and similar views.

Launched in 2007 and acquired by Walmart in 2018, Flipkart hit many milestones during the early months of the pandemic-induced lockdowns. To begin with, it saw a nearly 50% jump in the number of new users right after the initial pandemic lockdowns last year and a 35% rise in the number of onboarded sellers during 2020. The company maintained its growth momentum in 2021 and also saw the maximum number of downloads. 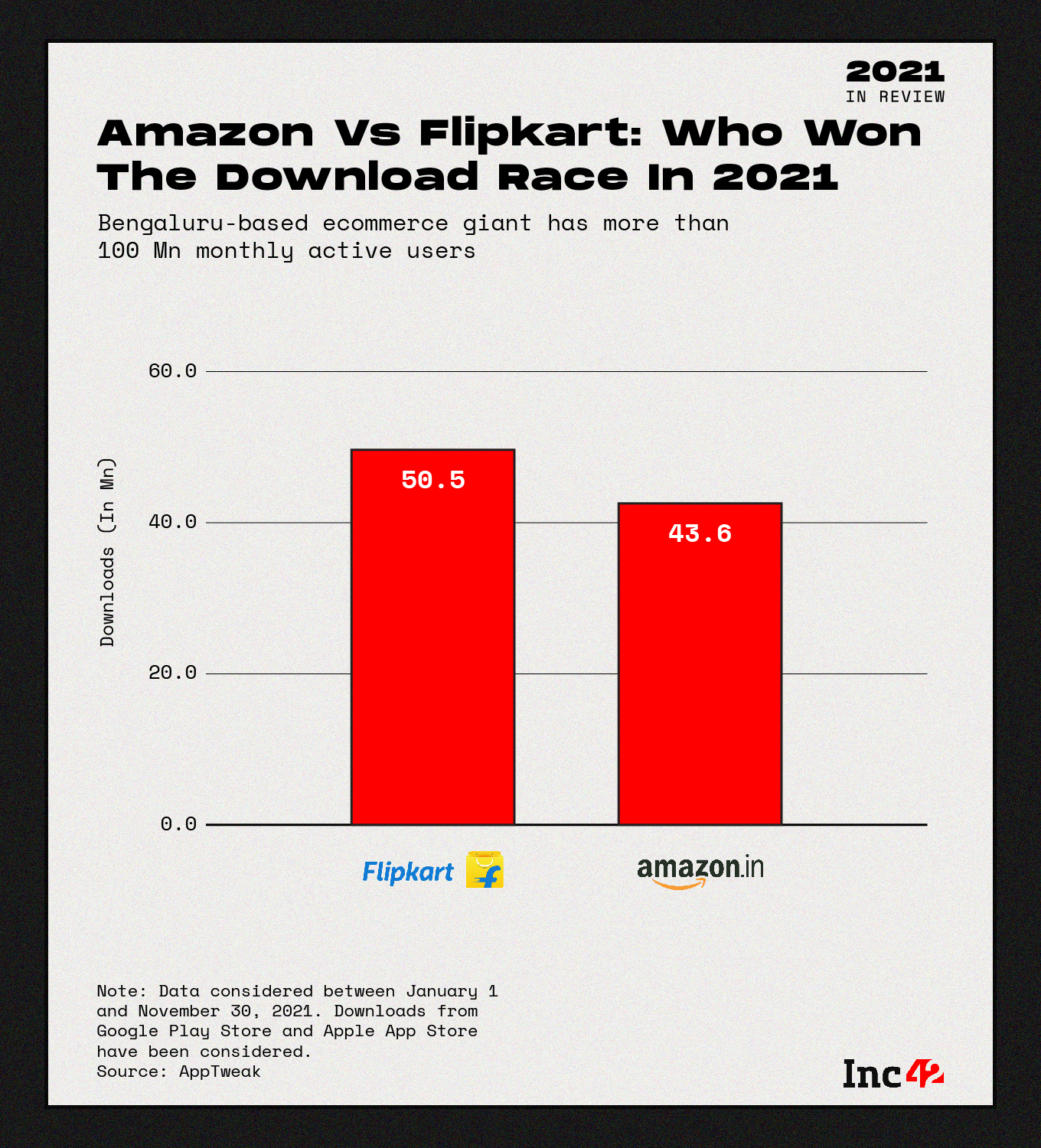 Between January and November, 2021, Flipkart recorded more similar views than Amazon India on the Google Play Store — a total of 992 Mn. According to AppTweak, similar views present an estimated number of impressions an app gets when it appears under the ‘similar apps’ suggestions on a competitor’s page. Interestingly, Flipkart gained around 31% of similar views, or 307.7 Mn, via the social commerce app Meesho. 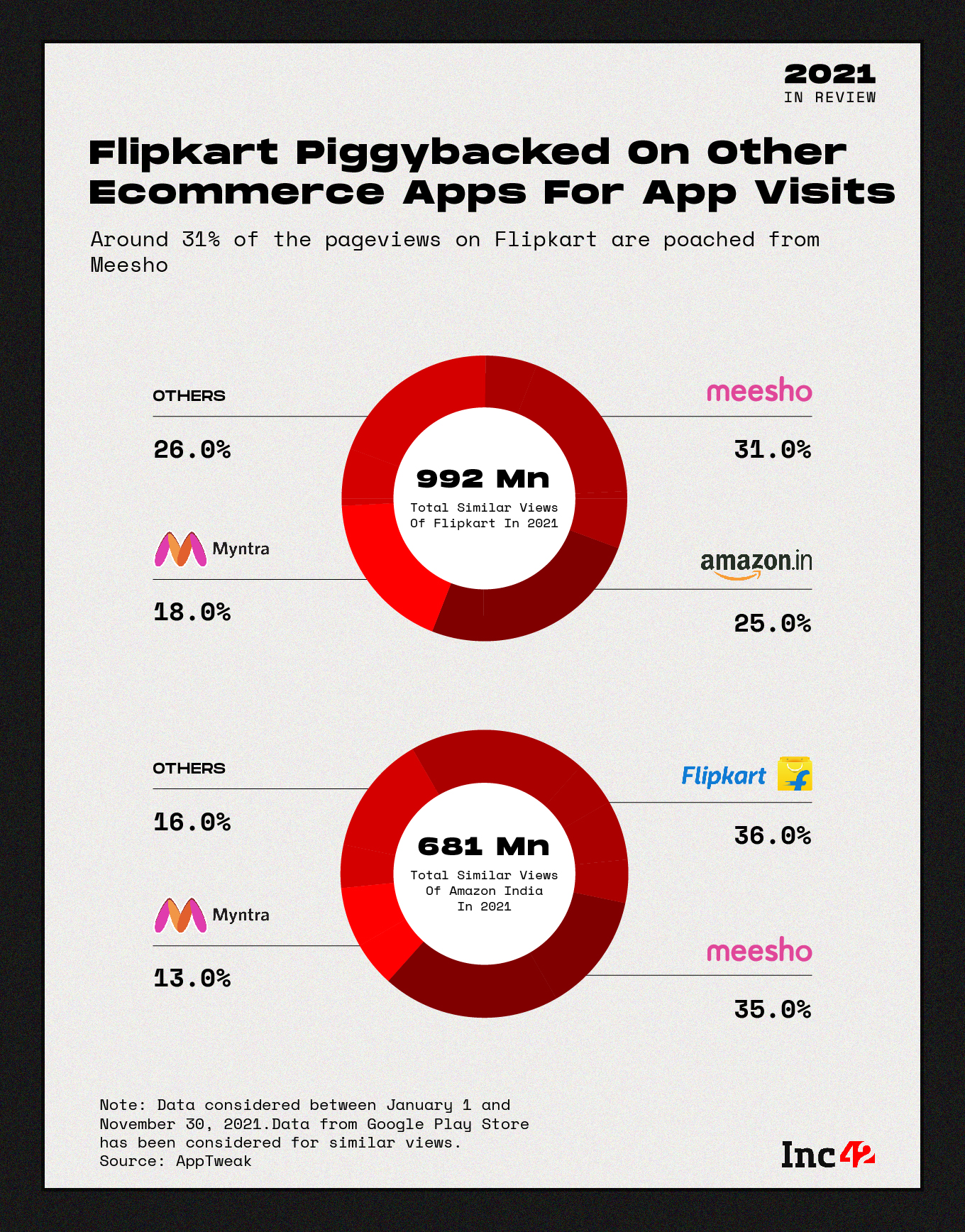 Incidentally, the Google Play recommendation UI largely depends on the ‘similar to’ mechanism. As Flipkart’s business model is very similar to Amazon’s, it is easy to understand why Amazon managed such a large number of recommendation views via Flipkart.

Again, Flipkart has recently ventured into social commerce, and its platform Shopsy directly competes with the likes of Meesho and DealShare. The new venture has already amassed more than 2.5 Lakh sellers, 51 Lakh users and a catalogue of 150 Mn+ products, one of the reasons why Google Play recommended Flipkart on the Meesho (a social commerce app) page.

Amazon Vs Flipkart: Who Won The Festive Season War In 2021?

Festive season sales are most crucial for any company working in the retail sector. So, it was a given that Amazon and Flipkart would go all out to win the battle of the titans in 2021 as India partially recovered from an unprecedented slowdown. As customer experience determines the number of repeat orders, Inc42 partnered with Clootracks to understand the same for these two platforms in October 2020 and October 2021.

Here are a few key takeaways: 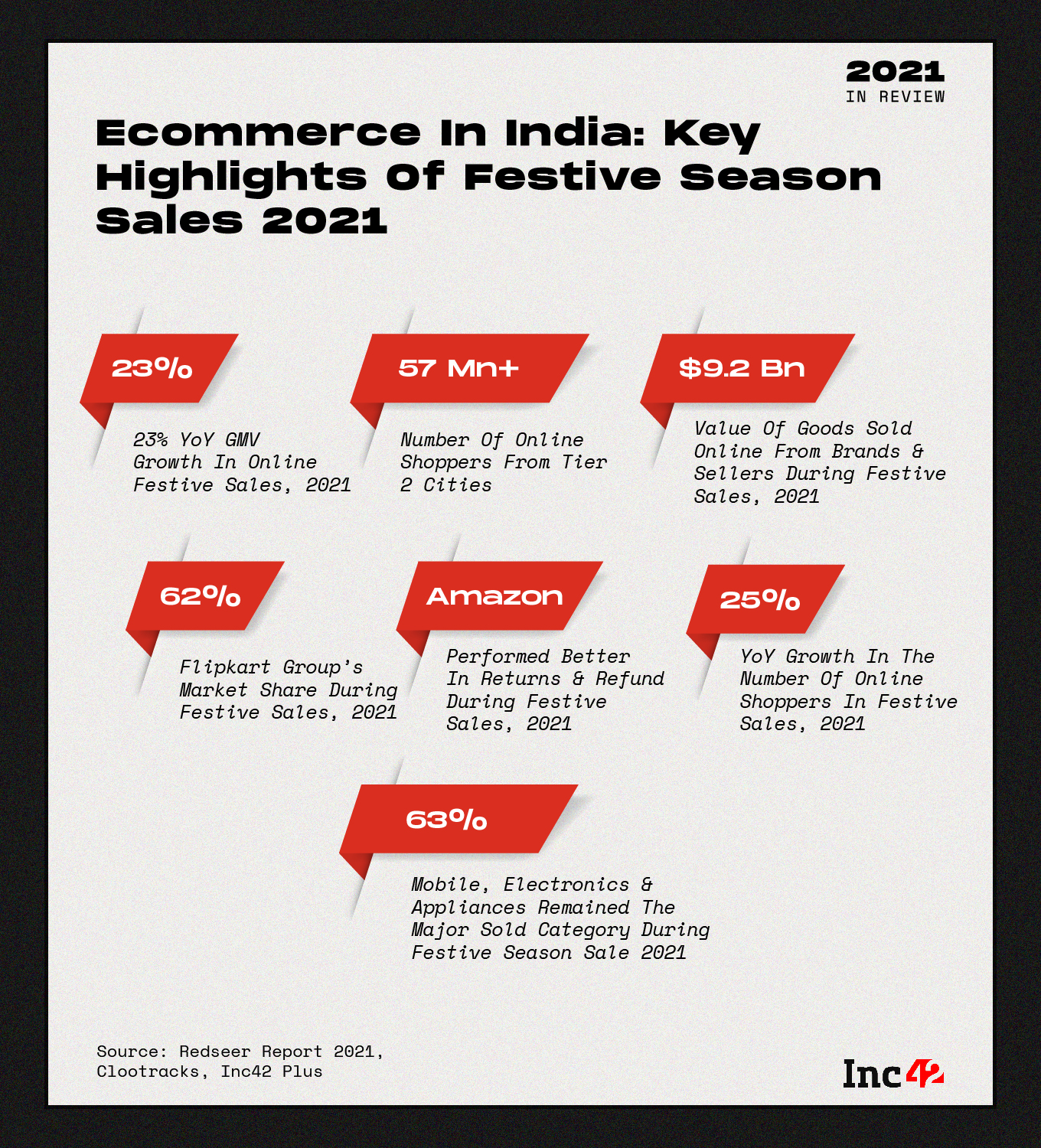 Amazon Vs Flipkart: Who Won The Customer Experience War In Festive Season Sales, 2021?

Flipkart ruled Indian customers’ hearts during the festive season sales this year (October 2021). It led on all delighter parameters, including value for money, customer satisfaction, delivery experience, installation and accurate results. It also had a better brand equity score across the delighter categories compared to Amazon India.

Based on customer experience analysis, we observed that Flipkart was more successful in creating a positive customer sentiment than Amazon India during the 2021 festive sales. It was perceived as the best for customer satisfaction and topped the brand equity score with 9.7. According to Clootrack, brand equity score (ranging from 0 to 10) shows how favourably a customer perceives a particular brand in its category. 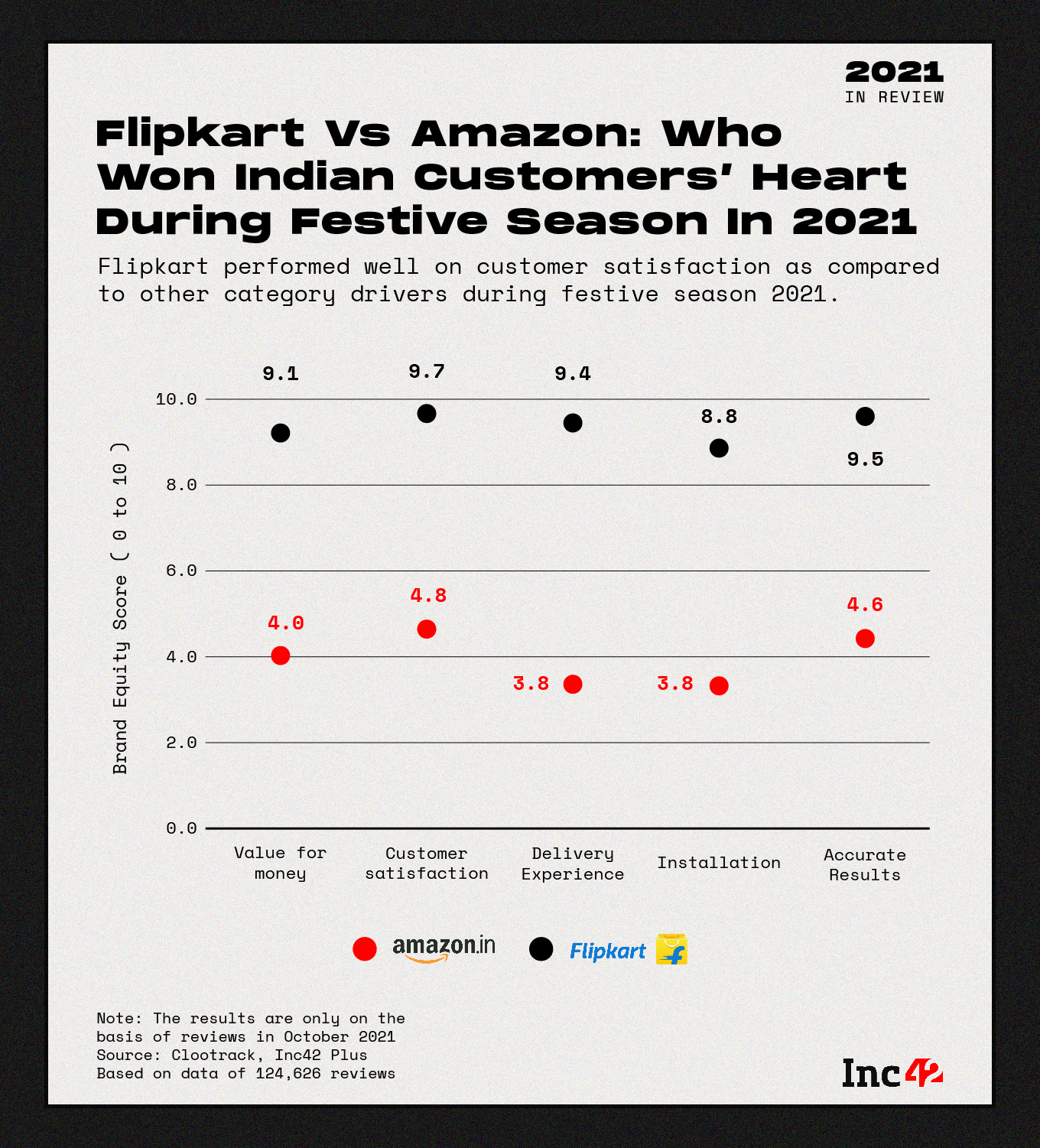 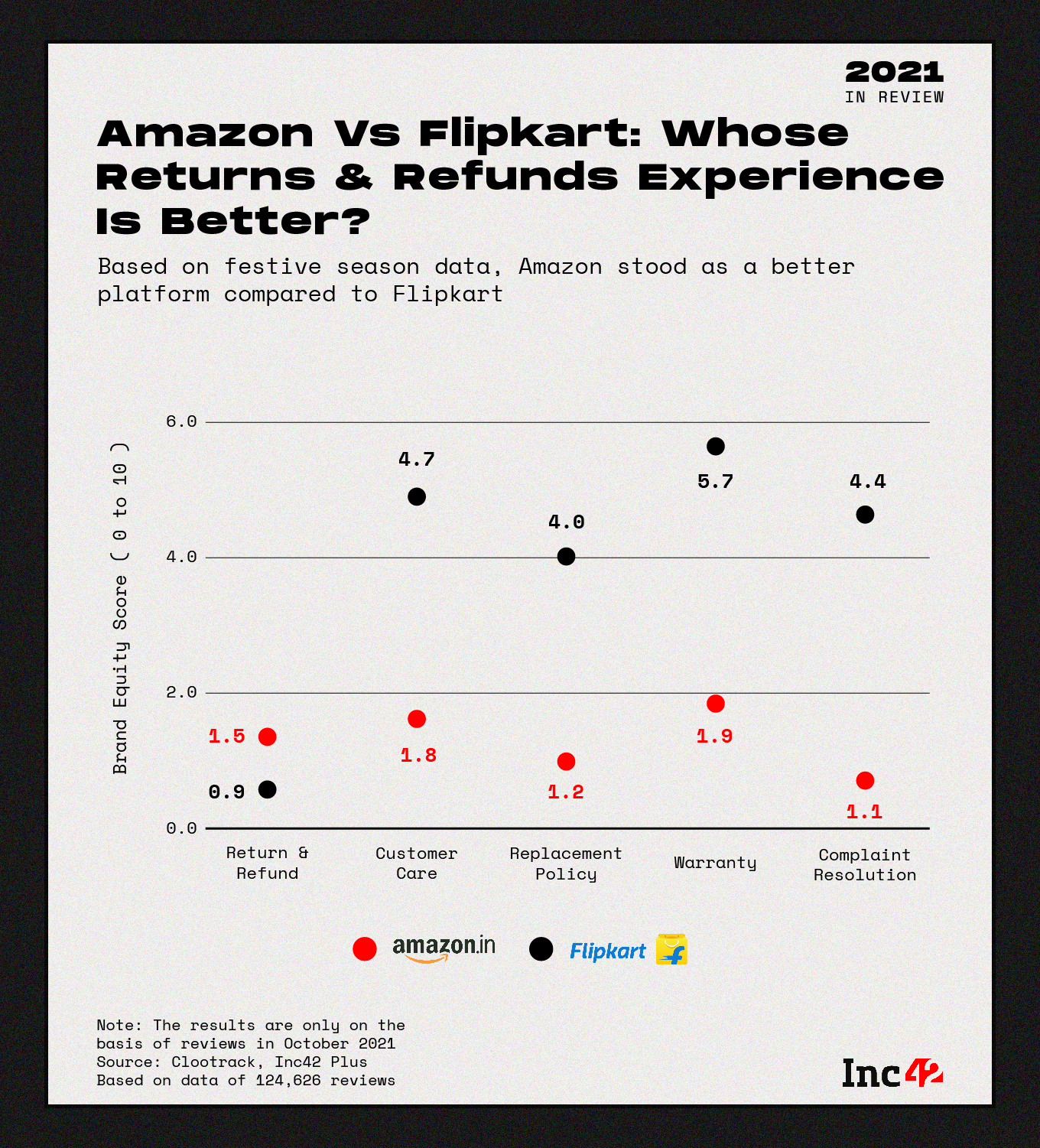 Amazon Vs Flipkart: How Will The Indian Ecommerce War Unfold?

Online sales and shopping festivals may continue to thrive, but the gala events were peppered with some disturbing news this year. Both Flipkart and Amazon India are currently under the scanner of the Competition Commission of India (CCI) for allegedly promoting select sellers on their platforms and adopting business practices that stifle competition.

What’s more, the draft ecommerce rules to enable ‘customer protection’ and ‘market regulation’ may prove to be a double-edged sword for the ecommerce giants. Manoeuvring around the rules will draw instant regulatory flak. But if they comply, there is a chance to lose revenue due to a ban on flash sales, a policy to push domestic alternatives instead of foreign products and a mandate to remove ‘related parties and associated enterprises’ listed as sellers on the platforms.

Additionally, the Confederation of All India Traders (CAIT) launched a month-long national campaign against Amazon India and Flipkart in September 2021, alleging that foreign ecommerce companies are adversely impacting India’s economy and retail market. The trade lobby had even asked the government to suspend Amazon India’s operations after the CCI said that the company’s 2019 deal with Future Group “shall remain in abeyance” until a fresh review, citing suppression of information.

Reliance Retail, India’s largest organised and omnichannel retailer, has a solid footprint across the verticals where Amazon India is a strong player. If Future Retail, which owns brands such as FBB, Big Bazaar and HyperCity, merges with Reliance, the latter will be unbeatable in offline retail, especially in the supermarket format, and eventually lead the online retail space since it has already started building a super app.

Clearly, the allegations of pushing legal boundaries in the ecommerce space and the rising legal complications around the Future Retail deal have landed Amazon India in deep trouble, considering it has invested more than $6 Bn in online retail in India. Plus, there will be another business rival as formidable as Reliance. The Tata Group, one of the biggest conglomerates of India, has also joined the Indian ecommerce war with its super app TataNeu, to be launched in early 2022.

Amazon’s own track record as an industry leader is patchy even on home turf. Only recently, it was able to dethrone Walmart in the overall retail market, thanks to the pandemic-driven tech acceleration. For the most part, Walmart was a category leader, occupying more than 15% of the retail market, while Amazon strutted at the second position with less than 10% of the sales.

Given the current industry volatility, Flipkart, too, is not out of the woods. Both Amazon and Flipkart’s parent company Walmart have been fighting a proxy war on the Indian turf for a long time. Of course, Flipkart holds a bigger market share than Amazon in India. But it will also be impacted by the Future-Reliance deal à la Amazon India and may not be able to sweep a four-pronged battle for supremacy while getting hounded by regulatory authorities.

The future remains unclear for the Big Two until the regulatory challenges are met, and the long-brewing legal battles are lost and won by the concerned parties. Only then a sustainable business strategy may emerge, and a grand finale will be on the cards to decide the ultimate winner in the Indian ecommerce space.

With Inputs from Laxitha Mundhra

The post Amazon Vs Flipkart: Who Led The Indian Ecommerce War In 2021? appeared first on Inc42 Media.

Source Link Amazon Vs Flipkart: Who Led The Indian Ecommerce War In 2021?