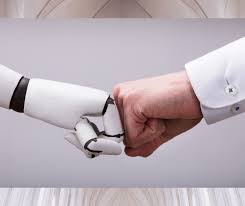 Home / Are Humans Falling in Love with Robots?

Are Humans Falling in Love with Robots?

Cristiane Bonifacio in Milton Keynes has just taken out a large chocolate bar from the robot on a hot afternoon that has arrived outside her home. Ms. Bonifacio had to attend a work call via Zoom, so she hurried back indoors, but she got sufficient time to praise the robot delivery service that sends these robots scuttling along her local streets. The white robot had a small orange flag with six wheels.

“I love these robots. Sometimes you find one that got stuck, so you help it, and it says ‘thank you”, she said.”

This service was launched four years ago in Milton Keynes by Starship Technologies, and since then, it has been increasingly expanding, as additional towns begin to further add this service.

Now, robots are a part of life in several towns after playing the villain in science fiction for decades.

Amber Case, an Oregon-based specialist in human-robot interaction and how technology changes everyday life, said that, everyone saw robots in movies as a technology that attacks people, but on the contrary, people use delivery robots, and robots wait for them.

According to Ms. Case, a crucial part of the human-robot relationship is when robots need assistance from a passer-by after it encounters any obstacle on the street. If any form of technology needs human support, this can be adorable. Everyone likes a robot that sometimes needs a human, and this assistance can lead to creating a bond.

These robots are powered by batteries and are called or opened by using an app as they are armed with sensors to spot walkers and are even equipped with a speaker. This helps robots to let a remote human operator address people who are picked up by video cameras installed in these robots.

But still, this arsenal of tech is not being applied in the right way, Ms. Case says. “I feel they are automating the wrong part of the journey. Humans are really good at negotiating terrain and finding a particular house.”

Is this just a fetish for automating things?

Despite these second thoughts, she concedes that the team at Starship Technologies has done it correctly by making sure that these robots are not scary, but cute instead. This indicates that the team has put more efforts into the design, unlike other robot makers, as well-designed robots are anticipated to be relatively more successful.

According to Victoria Butterworth, a relatively new resident of Milton Keynes, highlighted her reason for moving here – robots. She mentioned that these robots are so original and quirky at the same time. She found this idea very interesting, and thus it garnered attention from her.

There were many other reasons to move here, she added, but robots became a crucial aspect of her life when her Dachshund developed disc displacement disorder and required constant assistance and attention. Robots were a real godsend when her dog needed the aid of robots, as it let her care for her pet without needing to leave home for errands, for example, when she needed to make a grocery run, etc.

Andy Curtis, the operations manager at UK’s Starship, who is in charge of 180 robots in Milton Keynes, said that each robot is capable of alerting people to their presence, and if the robot was offered assistance, then it would offer a ‘thank you’ in return, it is not designed to be invasive but cute.

Essentially, what Mr. Curtis was implying was that if people find the robot struggling with a complex surface, and they jumped in to help, later a ‘thank you’ message would be played.

Adam Rang, a businessman in Tallinn, said that he was excited by the robots, but this is not the same thing his two-year-old son feels about them. When he pointed out to the robots, his son didn’t care as he was more interested in buses. This ultimately means how normal this became for the new generation who view robots on the street.

On a Friday night, there was a queue outside Moores Fish & Chips in Milton Keynes. Johnny Pereira, a co-owner of Moores Fish & Chips, said that this fusion of hi-tech and traditional practices has resulted in a hit for him with his customers as well as the locals.

“Parents like to order robot-delivered fish & chips for their family; it’s popular with kids. It’s definitely increased business. However, I can spot customers sitting outside, who are new to Milton Keynes – stare at the robots! People who live here are used to them.”