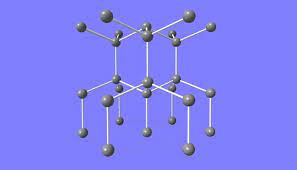 Home / Graphite Transformed into A Hexagonal Diamond in Picoseconds

Graphite Transformed into A Hexagonal Diamond in Picoseconds

The transition in graphite-diamond stages is of particular interest for fundamental reasons and in an extensive range of applications.

Material kinetics, on very rapid compression time scales, delay the evolution of graphite to the equilibrium cubic diamond crystal structure, which is commonly known as a diamond. Graphite’s shock wave compression, in general, requires more than 50 GPa (Gigapascals) (500,000 atmospheres) of pressure to detect the transition in phase on the time scale of shock compression experiments. Additionally, Lonsdaleite, the hexagonal polytype of a diamond, has been spotted in shock-compressed material after meteorite impact events. This ultimately suggests that the time scale of compression is performed as one of the major elements during the transition phase.

In the latest experiments, researchers at Lawrence Livermore National Laboratory (LLNL) have followed the conditions applied while forming Lonsdaleite by including a picosecond time scale laser compression in their study and detected the evolution with state-of-the-art material characterization by using femtosecond X-ray pulses.

The formation of Lonsdaleite following shock compression has been observed as a continuing mystery, which also includes the debate over whether the hexagonal diamond is a cubic diamond with defects or the existence as an extended structure. According to the previous findings on the phase evolvement of graphite to Lonsdaleite or diamond under moderate shock compression, a diffusionless mechanism has been supported to transition the phase successfully. But these experiments have not resulted in observing the atomic structure through the phase transition; this is why the transformation mechanism was not publicized.

Mike Armstrong, a Scientist at LLNL and a lead author of a paper appearing in a special Shock Behavior of Materials issue of the Journal of Applied Physics, said that rapid compression is completely different from shock compression, as Lonsdaleite is created under compression. There have been various theories about the intermediate states and mechanisms of this phase transition for decades, which also includes the assumptions about why it is only produced under rapid compression and not shock compression.

A team of scientists used the distinctive ability of the Matter in Extreme Conditions instrument on the Linac Coherent Light Source in their latest experiment. They used this technique to observe the behavior of carbon during the phase transition to a picosecond scale compression shock increase ahead of sustained compression of ~100 ps. These types of ultrafast compression experiments have previously been used to examine unidentified states of matter under extreme elastic compression, but the graphite has not positively responded to ultrafast compression as it has not been studied on picosecond time scales.

A team of scientists was able to observe this phase transition where the product phase is connected to the initial stage. In the experiment, within 20 picoseconds after applying compression, the team detected a highly textured and almost single crystal product.

LLNL scientist Harry Radousky, the study’s co-author, said, “This confirms early speculation that this phase transition is diffusionless, and that Lonsdaleite may be an intermediate, even in the transformation to the final equilibrium state, a cubic diamond. This experiment addresses decades of speculation about the nature of this phase transition, which has been the subject of considerable theoretical work.”

A major outcome of these experiments is achieving the length and time scales of state-of-the-art simulations typically extrapolated to compare them with experiments of longer time scales.