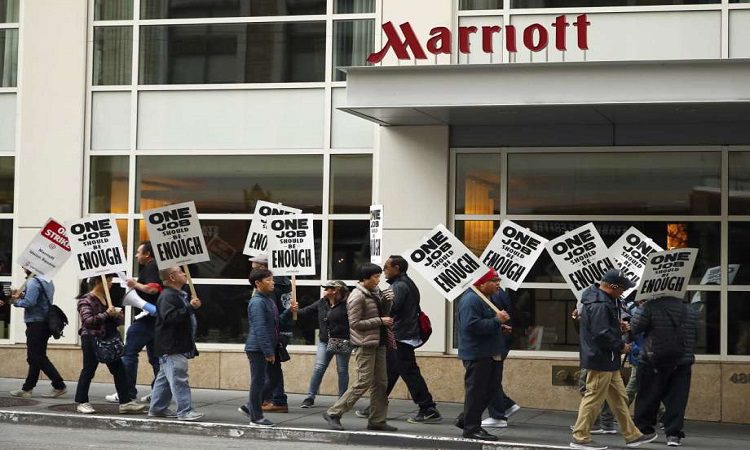 Marriott Employees on Strike Are Going Back to Work on Wednesday

Employees of the hotel chain giant, Marriott, have been on strike for the past, making things tough for some of the branches. Now, after the talk with the officials and forming of the new contract, the employees would be back to work from Wednesday. The hotel chain had held discussions with the representatives of employee union and the contract was approved from both sides. Both parties are fine with the contract and the officials at Marriott say that they are eager to welcome their employees to work. However, specific details about the contract are not available.

“We have taken a tremendous step forward in the direction of one job being enough for hotel workers in this city,” said Brian Lang, who is the president of the Unite Here Local 26. As it has been made clear, Marriott employees were demanding better treatment in terms of remuneration as well as other factors. He made the statement short after the union meeting, which finalized the decision. “It’s not just a matter of the hourly wage, it’s a matter of getting the hours. So people’s ability to get the hours that they need has been improved,” added Lang.

As said earlier, Brian Lang has not revealed specific details about the contract, which is yet to be settled by other 5000 Marriott employees across the country. Spread in four locations, an overall number of 8000 had gone on strike, demanding better minimum wage and number of working hours. Now, the newly-approved set of contracts would be addressing the demands. It also includes better provisions regarding harassment at workplace and the contract would be valid for four and half years. It also says that the employees would get back pay from 1st of March, which was when the previous contract ended.