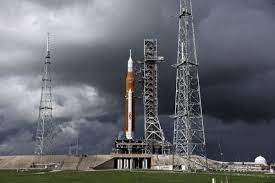 NASA will attempt a second launch of its mega moon rocket on Sept 3rd. The space agency made the announcement just a few days after the first attempt at liftoff was called-off after an engine failure.

The Artemis 1 rocket is composed of a 6-person Orion capsule. It was initially set to take-off on Monday, Aug. 29, for its maiden voyage to the Moon and back. However, engineers couldn’t cool down one of the rockets core stage RS-25 engines in time to launch. NASA officials stated that it was forced to abandon the launch because of poor weather conditions on Tuesday, August 30.

The fresh window for a 2nd attempt of the rocket will commence on September 3.

According to NASA’s Artemis project manager, Mike Sarafin, the launch pad timing for an attempt on Saturday will be 2:17 p.m. EDT. It is a window of two hours. NASA officials also said that another launch might be planned immediately after 48 hrs. from this designated time, if the rocket does not lift-off on Saturday.

NASA says this is the first of 3 crucial test flights that NASA will use to develop the ground, software, and hardware that will eventually carry human beings to Mars. The Artemis 2 and Artemis 3 will follow in 2024, 2025-26, correspondingly. The Artemis 2 will be accompanied by a human crew of four, and Artemis 3 will send the first female as well as ‘person of color’ to the South Pole of our moon.

The launch on Monday was supposed to happen at 8:33 a.m. ET, but there were issues with the attempt from the get-go. Early that morning, attempts to fuel the rocket were delayed because lightning, that had already struck the rocket pad two days prior, and threatened to zap the rocket once more.

Just after 6 AM ET, the launch was halted by an issue as the team stated that liquid hydrogen fuel cooled only three of the four rocket engines to adequate temperatures before ignition. The engine that was problematic, engine 3, seemed to be about 40°F (22.2°C) above the minimum temperature of minus 250°C required for launch.

NASA will try to resolve this issue before Saturday’s launch. It will perform the engine cooling procedure half-hour earlier, which is a trick that officials claim was successful in a test last year.

John Honeycutt, who is NASA’s program manager for the Artemis 1 said that the sensor’s behavior does not match the physics.

The malfunctioning sensor can’t be replaced easily, so the rocket will have to be brought back to NASA’s VAB where it will be thoroughly examined. Honeycutt stated that his team was looking into a solution that would allow flight engineers to make a “well-informed” decision on if the rocket will be able to launch without these sensor readings.

NASA is heavily banking on the Artemis 1’s success. However, the price tag has soared to alarming levels. The program, launched in 2017, cost more than US$40 Billion to be developed. According to Paul Martin’s office, it is expected to cost US taxpayers US$9.3 billion by 2025. This figure comes from Paul Martin, NASA’s internal auditor.

NASA officials insist, despite these problems, that the people of the United States, will find it reasonable to pay for the rocket. They say the rocket will launch a new era in space exploration.

“This rocket is brand new.” Bill Nelson, who is the administrator at NASA, stated that it won’t fly until the rocket is ready on Monday after the scrubbed launch. There are millions of parts to this rocket and its systems. The complexity of it all is overwhelming when it comes down to a countdown.

Nelson said that four scrubs delayed his 1986 launch of the space shuttle.