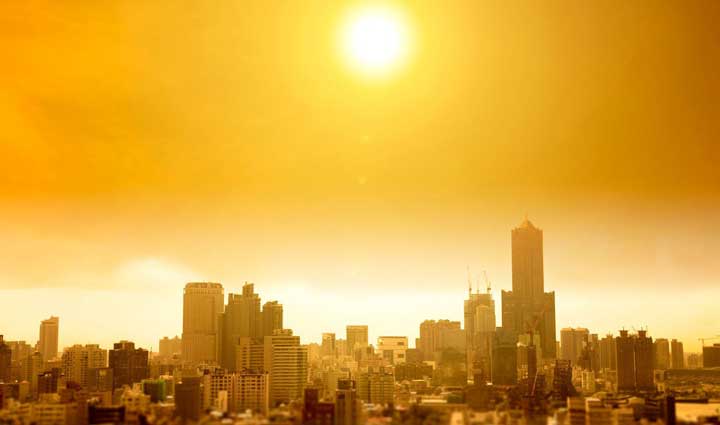 A team of engineers at Purdue University has developed the whitest paint ever that might be able to keep buildings cool just like an air conditioner.  The same group has come up with ultra-white paint in October 2020. The senior author of the new study, Xiulin Ruan, who is a professor of mechanical engineering at Purdue University in Indiana, has said that if this paint covers the area of a 1000 square feet roof, it will be able to provide cooling power of nearly 10 kilowatts. He has said that it might be more powerful than the central air conditioners that are used by most households.  The author has claimed that the cooling power of the whitest paint is derived from its striking ability to reflect sunlight and infrared heat.

Xiulin Ruan has said that commercially available paints can reflect 80 to 90 percent of sunlight but they are unable to keep surfaces cool to temperatures that are lesser than their surroundings. However, the new whitest paint can reflect around 98.1 percent of the sunlight that is higher than the former record holder ultra white paint. As per the experts, the former ultra white paint is able to reflect 95.5 percent of sunlight. These paints are the opposites of the ultra-black paint that has been created by experts in 2014. The ultra-black paint is known as vantablack, which can absorb around 99.9 percent of visible light.

Experts have looked at hundreds of white materials and examined around 10 of them in different formulations to create this whitest paint. Earlier, experts have developed ultra white paint with calcium carbonate. This compound is usually found in seashells and rocks.  Engineers have used high concentrations of barium sulfate to develop new whitest paint. Barium sulfate is a white, odorless, insoluble composite that is used in X-rays, and CT scans as contrast media. Health professionals use a coating of barium sulfate on the surfaces of the esophagus, stomach, or intestine so that they can see clear images. This compound is used to make photo paper and cosmic white as well. Engineers have used varying particles of barium sulfate to increase the reflectivity of the new whitest paint even further.

They have said that how much light is scattered by each particle depends on its size. As per the experts, the paint can scatter various wavelengths of light with a wide range of sizes of particles.  The team of experts has found that the newly developed paint can keep surfaces nearly 19 degrees Fahrenheit cooler than the ambient atmosphere at night and around 8 degrees Fahrenheit cooler than their atmosphere when the sunlight is strong in the daytime. Experts have found that the new whitest paint has been able to reduce the temperature during the winter season as well. The paint has reduced the sample temperature by 18 degrees Fahrenheit. The team has submitted a patent application for this extremely white and cool paint. Experts are in talks with a company as well to market their product.

There are certain cities where people have already started painting their roofs white to conserve energy. As per the report, around 10 million square feet of rooftops have been painted white in New York. Scientists are even thinking to use these paints to cool down our rapidly warming planet. They are planning to coat areas with these paints where people do not live. The senior author of the study, Xiulin Ruan has said that as per his estimate, only 1 percent of the earth’s surface needs to be coated with this paint, especially areas where the human population does not exist. He has said that the paint might be useful to fight against climate change drift.

However, some experts have raised cautions against the findings of Xiulin Ruan. Ronnen Levinson, who is the leader of the Heat Island Group at Lawrence Berkeley National Laboratory has said that cooling benefits are usually tested after a reflective substance has been in use for a couple of years. He has said that it is unclear that the newly created whitest paint will be able to perform as per given standards.  Ronnen Levinson has said that the paint might give a 10 percent performance boost over other commercially available bright white coatings.