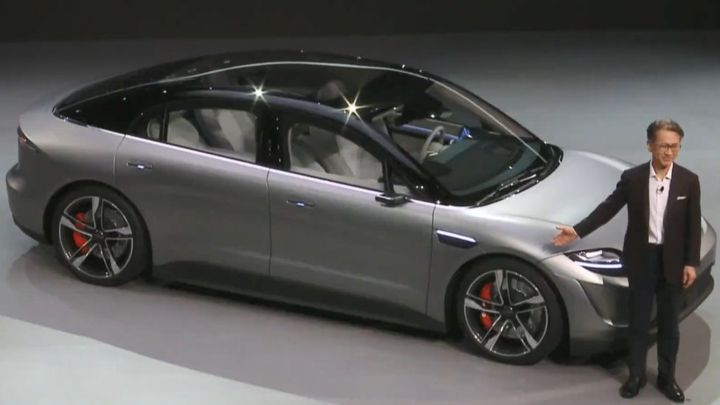 Sony has made a surprising announcement at CES 2020. The phone maker has launched a car Sony Visions-S. It is an electric sedan that is intended to exhibit various strengths of the Japanese tech conglomerate. The wide array of features may include camera sensors, entertainment products, and much more. Apart from this, Vision-S comprise of 33 different types of sensors on both internal and external faces of the car. It also includes 360 audio, widescreen displays, along with always-on connectivity. Well, some of the pieces are coming from other companies in the industry like Bosch and Blackberry. Besides this, a newly-designed EV platform powers Sony’s new electric car. Sony touts the Magna-developed platform could also power other vehicles, including SUVs.

In an effort to develop an electric car Sony has partnered with other companies like Qualcomm, NVIDIA, and Continental. Collectively, they aim to build a prototype sedan. Currently, Sony has not offered many details of Vision S. The exterior of the vehicle has some firm Porsche vibes, particularly around the highlights. Even more, the inner side so far looks like the Lucid Motors Air. The Vision-S has a screen spanning across the dashboard, which is almost similar to the accessories Chinese EV startup Byton is assembling in its cars. It also features display in the headrests for passengers sitting at the rear part of the vehicle.

The Vision-S model combines plenty of Sony’s imaging and sensing technologies. It would showcase the company’s innovation in artificial intelligence, cloud technologies, and telecommunication. As noted above, the car features 33 different types of sensors that are spread around the external and internal side of the vehicle. The set of sensors includes HDR-compatible CMOS image sensors, which will offer high resolution. Even more, Vision-S will host Solid State LiDAR mainly to provide the best vision at both day and night time, including object detection. It will also have a radar to detect relative velocity and distance sensing. Sony has long developed smartphones, but it is the first time it is engineering a vehicle. Maybe it is doing so to sell its components.