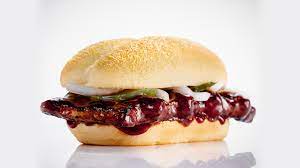 The McRib Sandwich Is Returning to McDonald’s Menus This November

McDonald’s made a surprising announcement on Thursday about the comeback of its cult-classic item on the menu, the McRib, just in time for the sandwich’s 40th anniversary. The BBQ classic, comprised of spiced boneless pork, BBQ sauce, onion, and pickles in a bun, will be featured in restaurants starting November 1. Even though it has not been a constant item on the menu for the fast-food behemoth, the McRib has amassed a sizable fan base over the decades. McRib’s limited release ended on December 2, 2020, the first time the item was offered nationally after 2012.

Prior to December, the sandwich was only available for a brief period in October 2019. “If you’re a McRib devotee or a first-timer, there’s really no disputing that the McRib is among the most legendary sandwiches of the last 4 decades, and we have thousands of messages and comments from customers to prove this,” McDonald’s said in a statement. The McRib is making a comeback on menus around the country. The McRib initially appeared as a regional favorite in Kansas City in 1981, before making its national debut the following year. The “internet revolution and development of social media cemented the McRib’s iconic status,” according to McDonald’s, and “buzz over its yearly reappearance has even given birth to the phrase ‘McRib Season.”

Temporary and limited-time products, such as McDonald’s McRib or Shamrock Shake, as well as Starbucks’ famed Pumpkin Spice Latte, frequently help establishments attract old and new customers. Furthermore, McDonald’s star signature meal campaign has been a huge hit, owing to collaborations with rapper Travis Scott, Korean music group BTS, and now The Saweetie Meal, which includes the hip-hop artist’s favorite items on the menu and “Saweetie ‘N Sour” sauce. Burger King (QSR) has imitated its rival’s tactic by presenting “Keep It Real” meals. The dishes, which were created by stars, utilize the celebrities’ actual names rather than their more well-known stage identities. Collaborations include Nelly and Brazilian vocalist Anita.

“McDonald’s has done this frequently, and it’s succeeded brilliantly, so you’re watching others rush in,” BTIG Restaurants Analyst Peter Saleh told Yahoo Finance lately. “Nobody likes to be left in the dust. It’s difficult to come up with anything that both resonates and works to generate traffic… This, I believe, will be a trend until they discover something else that succeeds,” he continued. Nonetheless, Saleh noted that “at some point, you run out of personalities to use,” noting that menu and culinary innovation are still critical to development. “However, with limited manpower, restaurants must restrict the amount of creativity and find other ways to attract consumers in and utilize their marketing strategies differently,” the expert explained.