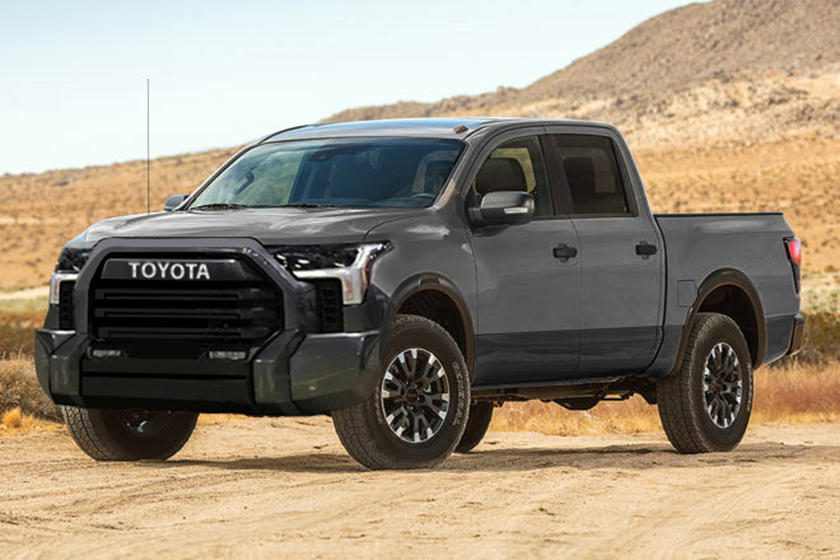 Toyota has officially launched the all-new Toyota Tundra in its entirety, after revealing its look months ago. The Tundra, which is its 3rd model, has received its most significant redesign so far and contains critical modifications and improvements that will enable it to challenge Chevrolet, Ford, and RAM’s full-size pick-up, existing industry leaders in the United States. The 2022 Tundra rides on a new platform and also receives all-new engine options with a slew of tech upgrades that were severely lacking in the last generation. There’s no avoiding the 2017 Toyota Tundra’s massive radiator grille, which is likely the biggest ever mounted on a road-going car or truck. The 2017 Tundra’s overall design is significantly boxier, with reshaped wheel arches providing visual strength. The Toyota Tundra, similar to the Land Cruiser LC 300, is built on the TNGA-F platform,  which also serves as the foundation for the next Toyota Land Cruiser LC 300. TNGA-F vehicles have a ladder-frame design, and the Tundra has numerous critical mechanical components in common with the upcoming Land Cruiser.

The Tundra, much like LC 300, has coil springs as well as a five-link suspension, which improves ride comfort, while saving Toyota a lot of money. A locking rear differential, multi-terrain select off-road settings, and crawl off-road cruise control are all features carried over from the LC 300. There will be 2 four-door body types available: CrewMax and a Double Cab. Double cab versions will be available with either a 6.5-footbed or an 8.1-footbed, while CrewMax models will be available with either a 5.5-footbed or a 6.5-footbed. The towing capability is 12,000 pounds. The 2017 Tundra also comes in a ‘TRD’ variant with a redesigned radiator grille and an integrated light bar, 2.5-inch Fox dampers with internal-bypass chambers as well as remote reservoirs, and 33-inch Falken Wildpeak all-terrain wheels. The TRD off-road kit includes Bilstein shocks, skid plates, an electronic rear locking differential, and crawl off-road cruise control. There has been a significant change in the Toyota Tundra’s interiors when compared to its previous generation. The 12.3-inch digital instrument display and the 14.0-inch touchscreen infotainment system use Toyota’s new Audio Multimedia interface, respectively, to make the cabin look more contemporary.

Wireless phone charging, a panoramic sunroof, heated and cooled front seats, and wireless Apple CarPlay, as well as Android Auto, are among the additional features offered. Certain Toyota Tundra enthusiasts may be surprised to learn that this vehicle doesn’t have a V8 engine variant whatsoever. A 3.4-liter engine with 389 horsepower and 649 Nm of torque, as well as a hybrid version offering up to 437 horsepower and 790 Nm of torque, are Toyota’s options alternatively. Rear-wheel-drive and four-wheel-drive configurations are available, and both motors are mated to a 10-speed automatic gearbox. The all-new 2021 Toyota Tundra will be on sale in the United States at the end of that year. The Tundra comes standard with Toyota’s Safety Sense 2.5 active safety system suite, which includes ADAS (Advanced Driver Assistance Systems), adaptive cruise control, and lane-keep assist are also on the list, as are automated emergency braking and junction turn assistance. The new Toyota Tundra will be available at an estimated price tag ranging between USD 36,000 and USD 60,000.