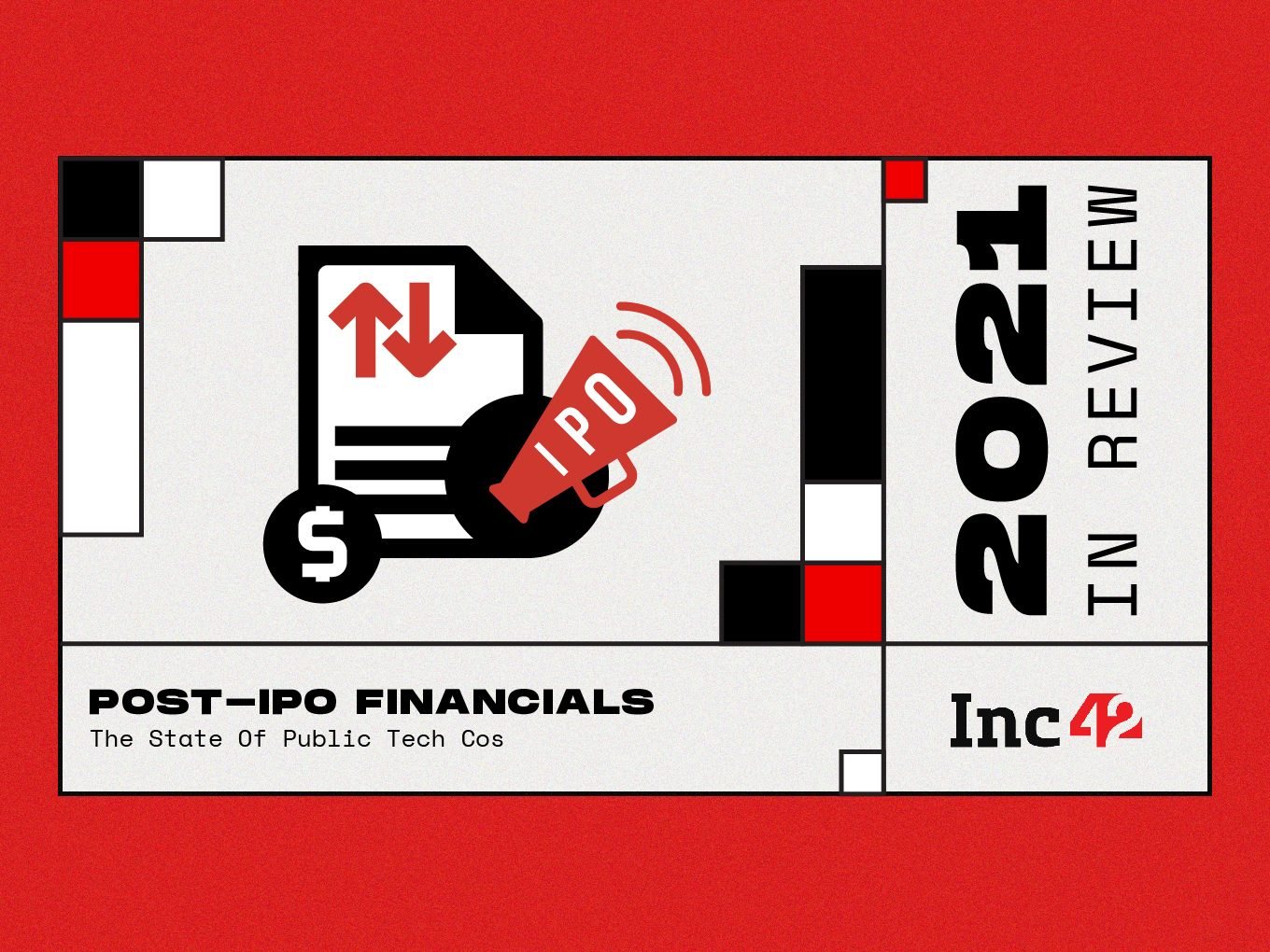 Public listings in the Indian market have typically been driven by large profitable companies, but this year, we saw a new breed of IPOs from startups that have yet to lay claim to profits. Some of the biggest startups in Indian tech continue to be loss-making businesses even after they have listed publicly. In fact, we can see just four profitable entities among the tech companies that went for an IPO in 2021 based on their financials for the quarter ending September.

Cumulatively, the eight newly-listed tech companies that reported their September financials saw losses of $231 Mn, while Policybazaar, RateGain, MapmyIndia have not filed their Q2 financials yet. The overall profit reported was just around $7 Mn in comparison. 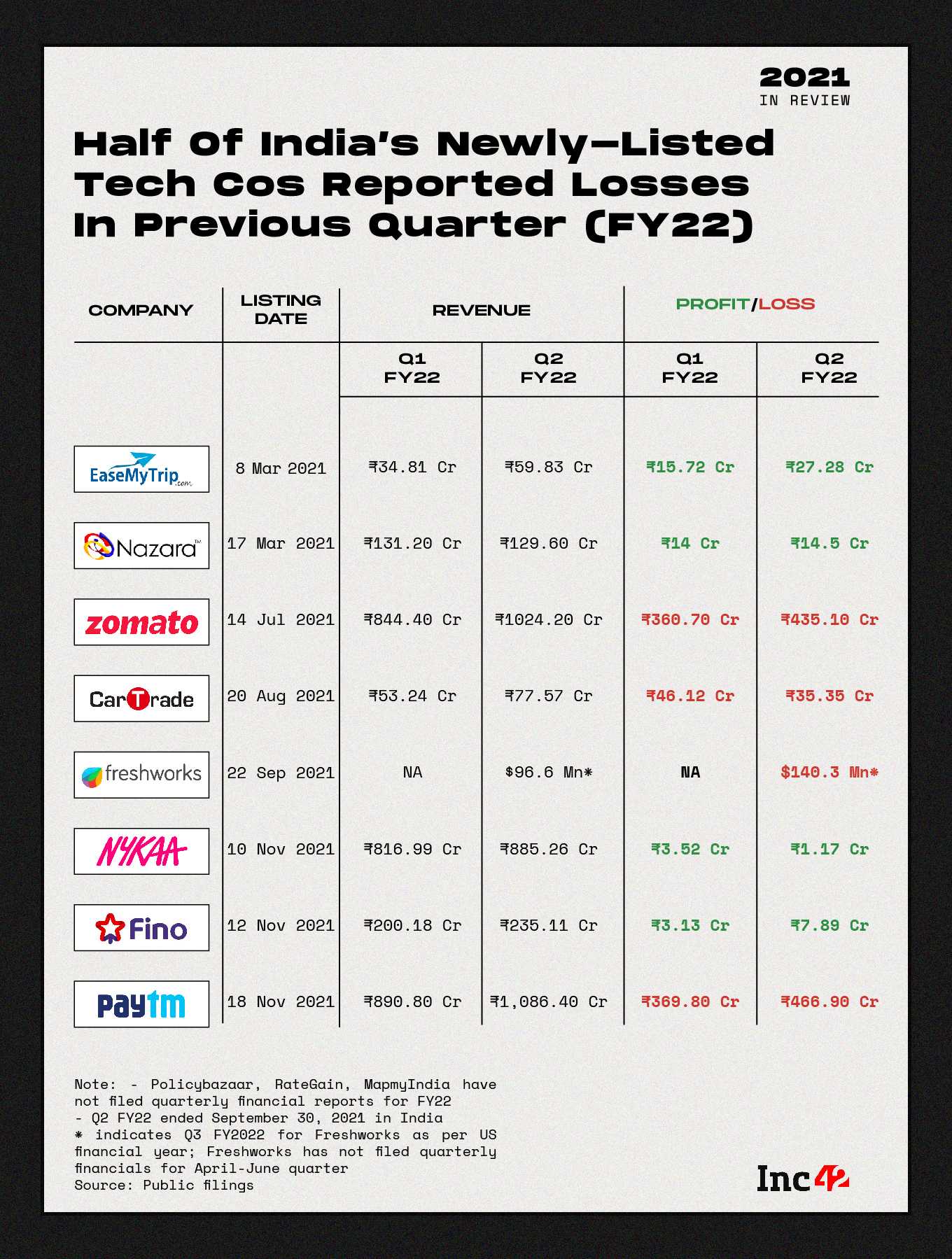 The losses for the Nasdaq-listed SaaS giant came on the back of a massive 305% rise in expenses to $214.63 Mn between July and September. The expenditure includes research and development ($57.08 Mn), sales and marketing ($96.78 Mn) and general and administrative ($60.76 Mn).

In the case of Zomato, the increase in losses come on the back of a 174% rise in its expenses to INR 1,601.5 Cr ($213 Mn). This was owing to higher spending on branding and marketing for customer acquisition, increased investments and growing share of smaller geographies and increased delivery costs in these regions.

Zomato also factored in poor weather and rising fuel prices in 2021 for its higher costs. But Zomato and other tech startups were not showing profitability before that either, with year after year of losses.

Just five out of the 11 newly-listed Indian tech cos that went public in 2021 reported losses in their previous financial year. Interestingly, CarTrade, which was among the companies that had a profitable FY21 (ending March 2021), reported a loss in both quarters in FY22.

The fact that most startups are loss-making is not just exclusive to India. But unlike in Silicon Valley where tech IPOs are more common, this is arguably the first time that retail investors in India have had to look beyond a company’s profit and loss statement. Public markets investors have had to dive into the potential addressable base, scale and growth that startups have claimed. 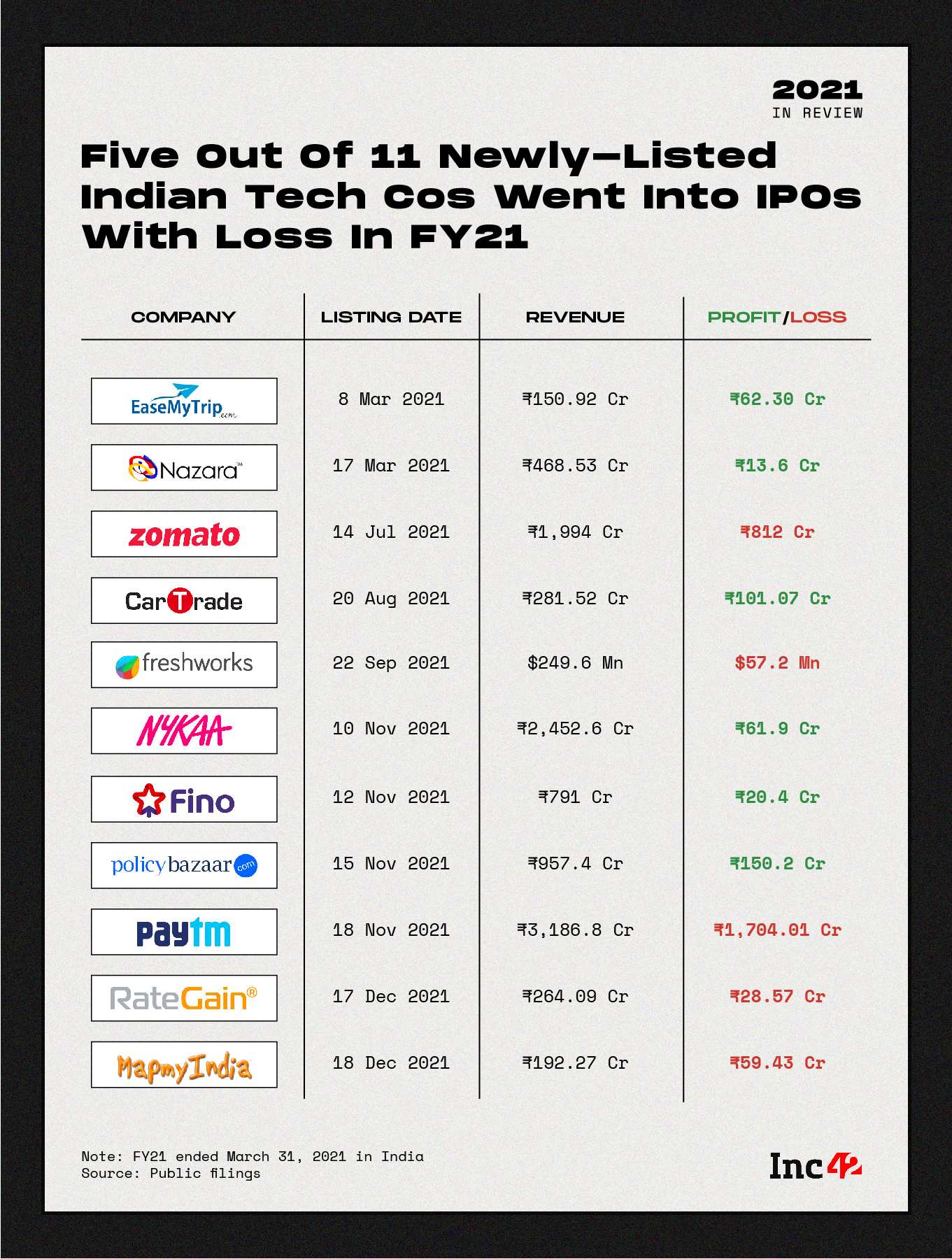 Analysts believe that while scale can become an analog for profits in the short run, this is not sustainable from the point of view of wealth creation. Shareholders and investors are likely to wait for years in the case of highly-scaled up companies such as Paytm and Zomato.

So the focus is on the underlying business and this is perhaps why the likes of Paytm have not done exceedingly well in the public markets since there is so much to unravel in the case of the fintech giant. Zomato is running the risk by investing in a handful of companies that it feels will add to its core offering.

The Long Road To Profits

While investors might even come to terms with the fact that the road to profitability is long, what they might not see as easily is how companies will get there. While the growing acceptability of B2B and B2C tech is a positive factor, not all sectors are growing equally. The travel sector is still on shaky grounds. And so far startup founders have not displayed the ability to create scale that can also bring profitability, despite taking advantage of the supposedly lower marginal costs in tech.

Zomato, for instance, saw its delivery cost per order increase by INR 5 in Q2 FY22 compared to Q1 FY22, which indicates that the company’s grip on unit economics may not be as strong as previously claimed.

Traditionally, the quality of a public company’s leadership was judged by the profits and the earnings growth, but that’s not possible with tech companies. While India’s startup founders may be role models for young people, this is not what stock market investors are swayed by. The fact that no ecommerce or food delivery startup or fintech company has come close to showing profitability quarter after quarter gives investors pause.

Retail investors and potentially institutional investors too will definitely have plenty of other choices in terms of more traditional stocks in the market in 2022, with the likes of LIC and NSE also on the IPO anvil. Given these, they might not show great appetite for risk involved in tech stocks. But that remains to be seen, of course.