India’s ecommerce market has been largely dominated by the Amazon-Flipkart duopoly over the past few years. But more recently, the likes of AJIO, Nykaa, Purplle, Tata CLiQ, Myntra (Flipkart-owned) and others have risen in prominence thanks to the maturing ecommerce user base as well as the need for brands and sellers to diversify their channels.

Although this may not be reflected in market share, the smaller vertical ecommerce players are now challenging the predominance of the marketplace giants, and in 2021, the ecommerce race is anything but a foregone conclusion.

In the ever-evolving post-pandemic landscape, all ecommerce platforms are seeing unprecedented growth. According to a Bobble AI (conversational media platform) report, the ecommerce industry witnessed an uptick of 77% in 2021 as compared to 2020. The study also revealed that the usage of beauty marketplaces such as Nykaa and Purplle grew by 64%, whereas fashion platforms Myntra, AJIO, Tata CLiQ and Meesho saw a whopping 368% growth over the past year.

Given the exponential growth and massive potential, this space has also attracted strong investor interest. India’s ecommerce sector raised $9.2 Bn in (as of December 18, 2021), a whopping 931% rise from 2020. 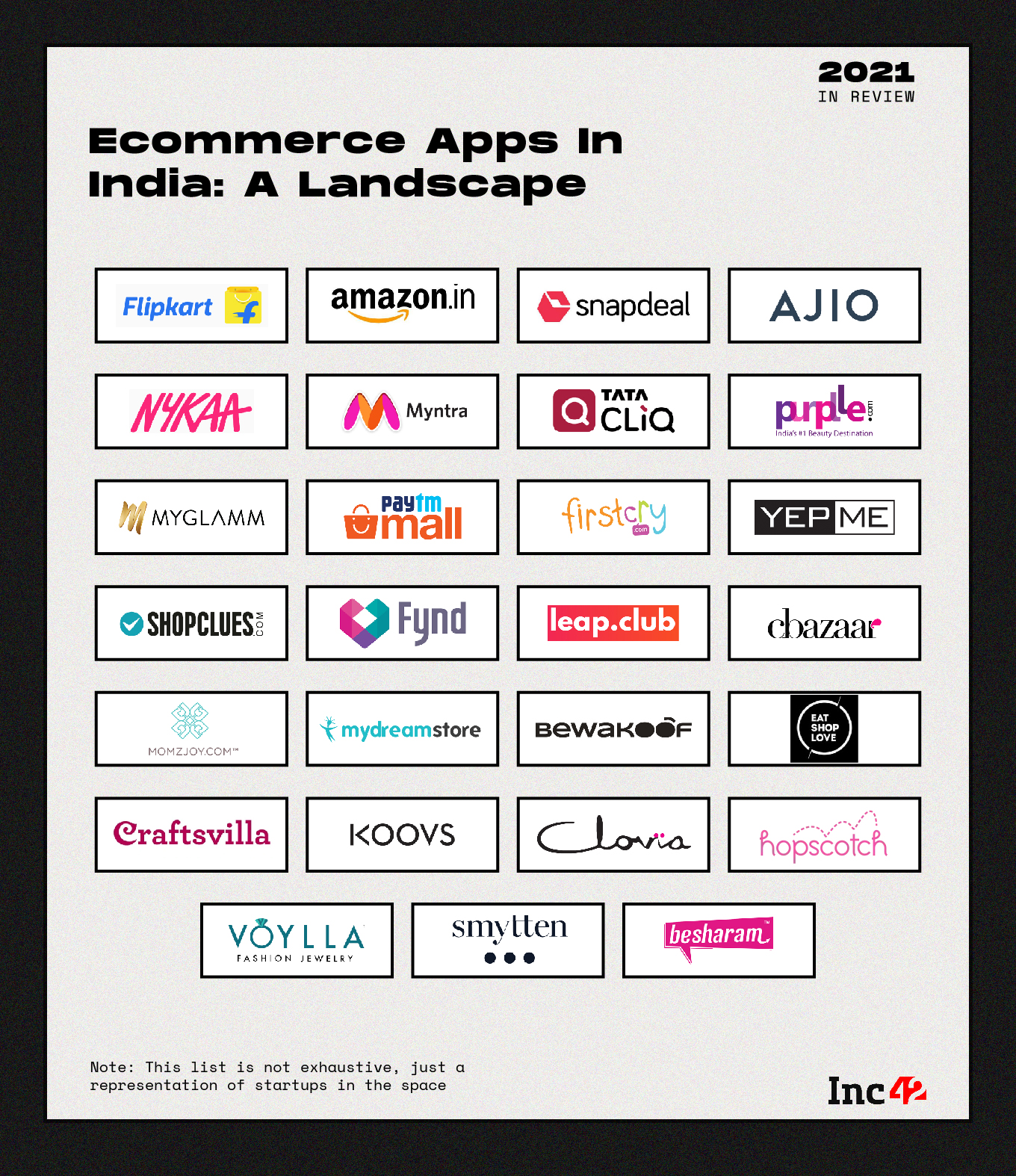 How Ecommerce Apps Stack Up

Despite a huge and growing addressable base of ecommerce shoppers (140 Mn+ in 2021), ecommerce apps have to battle each other for downloads and repeat buyers. Discounts and sales are often how brands get downloads and activity, while UI/UX (user interface and user experience), reward mechanism and leveraging data are the key to getting repeat buyers. 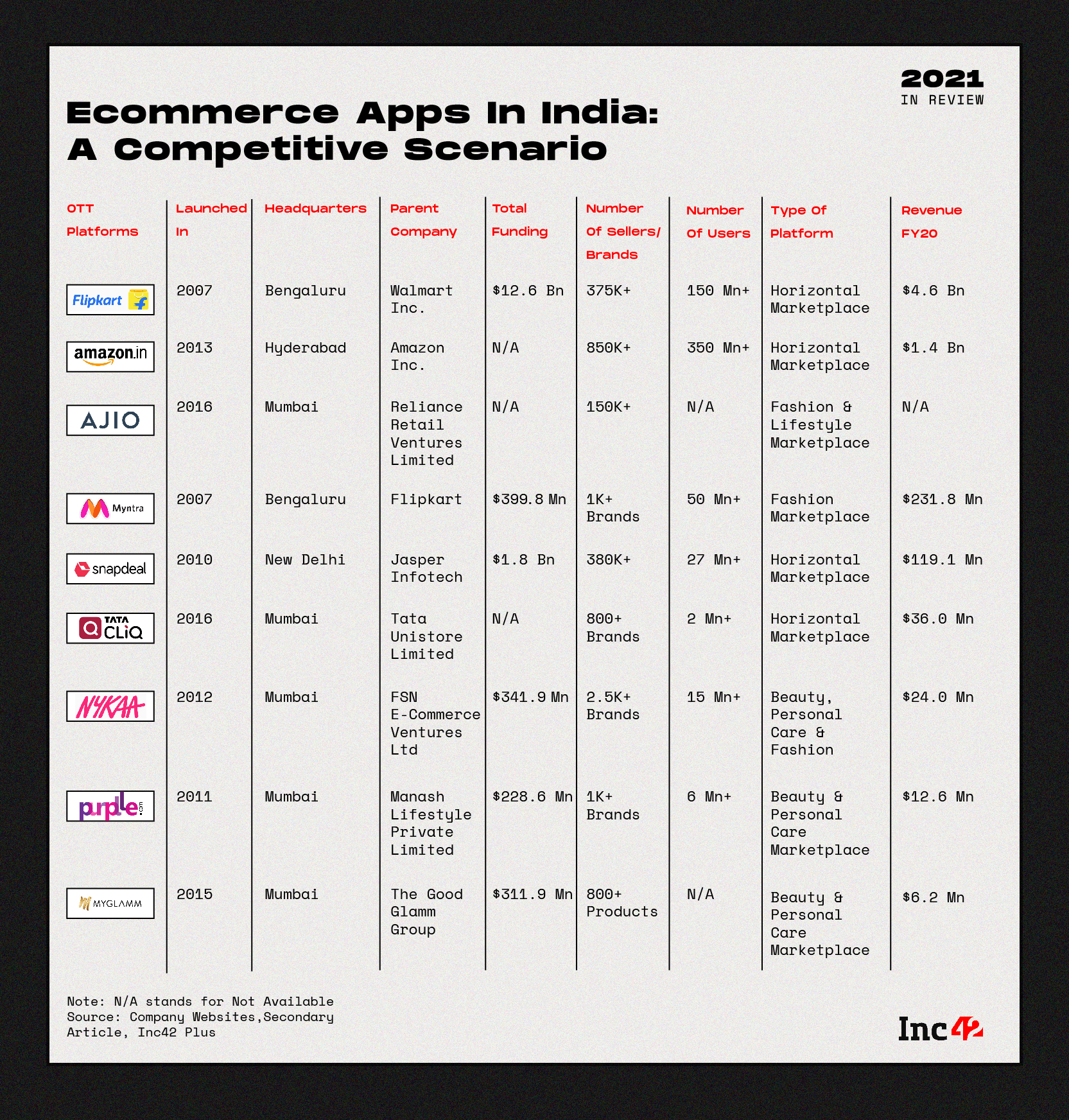 Inc42 partnered with AppTweak to understand how Indian ecommerce apps have performed in the past year in terms of downloads, pageviews, app power and more. Here are a few takeaways:

Walmart-owned Flipkart outpaced Amazon India and Reliance-owned AJIO in 2021 with the most number of downloads. AJIO narrowly beat Flipkart-owned Myntra with 39.6 Mn downloads in 2021 as compared to Myntra’s 36.5 Mn downloads.

Nykaa has been in the news of late after its strong stock market debut. The beauty marketplace had the highest revenue share (18.5%) in the total addressable online beauty & personal care (BPC) market in FY20. It has more than 15 Mn users and had around 8.1 Mn app downloads in 2021, as it expanded to become a house of brands.

Purplle and MyGlamm rounded off the list of top ecommerce apps, showing just how much headroom remains in the beauty ecommerce vertical. 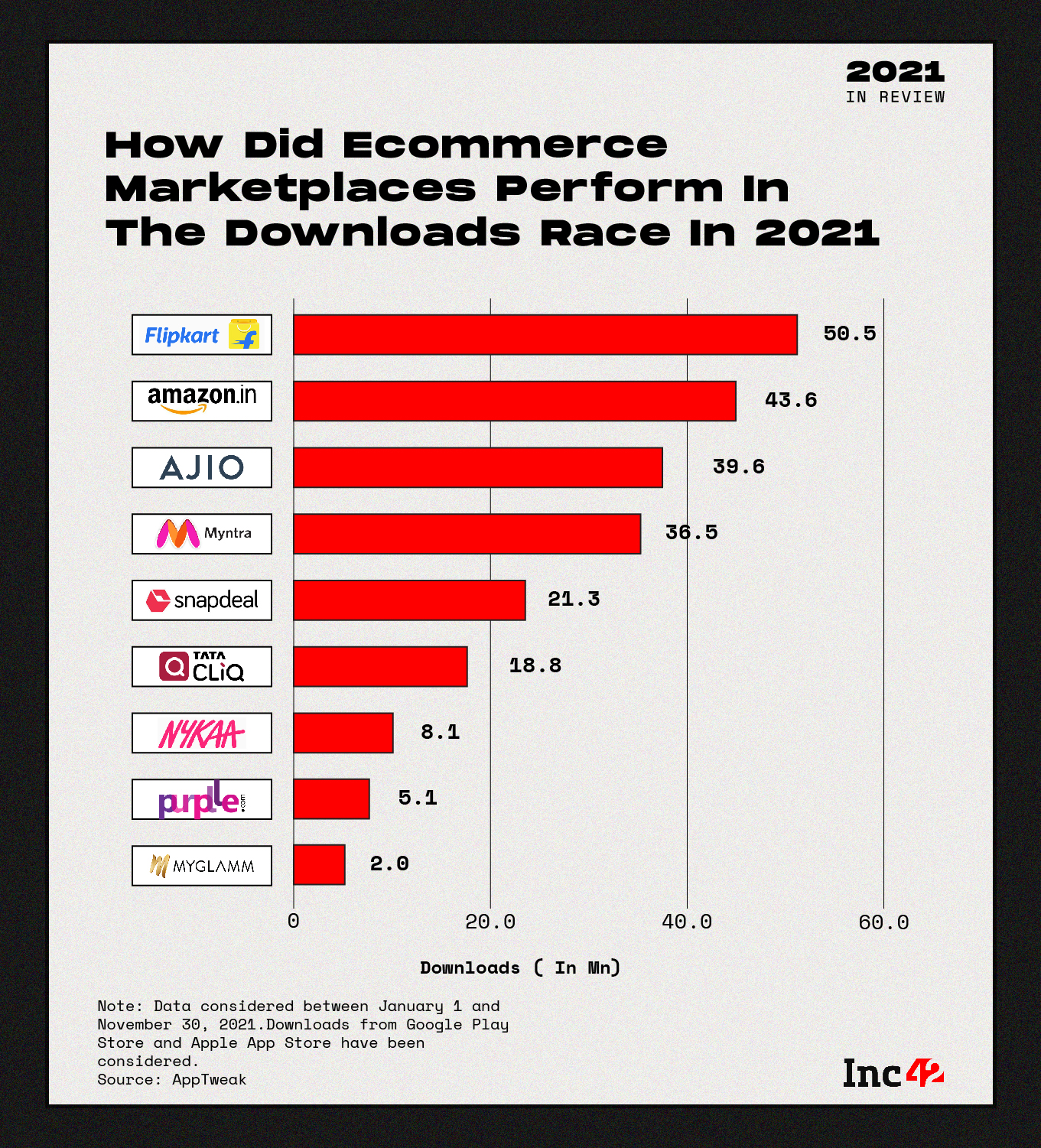 Flipkart Vs Amazon India Vs AJIO: A Game Of Views

App stores have become much more than just a publishing platform, they are a major driver for app discovery, resulting in downloads for a particular app. Thus, app store optimisation (ASO) becomes a critical move for ecommerce apps to acquire more new users and poach downloads or views from their competitors.

The entire point of ASO is to create a narrative that entices customers to download the app, which includes a host of factors that impact visibility and traffic.

According to AppTweak, similar views present an estimated number of impressions an app gets when it appears under the ‘similar apps’ suggestions on a competitor’s page.

Between January and November 2021, Flipkart recorded the maximum number of similar views among all ecommerce apps on the Google Play Store — a total of 992 Mn. Flipkart gained around 31% of similar views or 307.7 Mn from Meesho’s app listing page. This means 31% of Flipkart’s app page impressions came from users who actually landed on the Meesho page on the Play Store.

Myntra clocked the second-highest similar views at 745.8 Mn. It gained 25% of similar views, or 189 Mn, through Meesho’s listing. 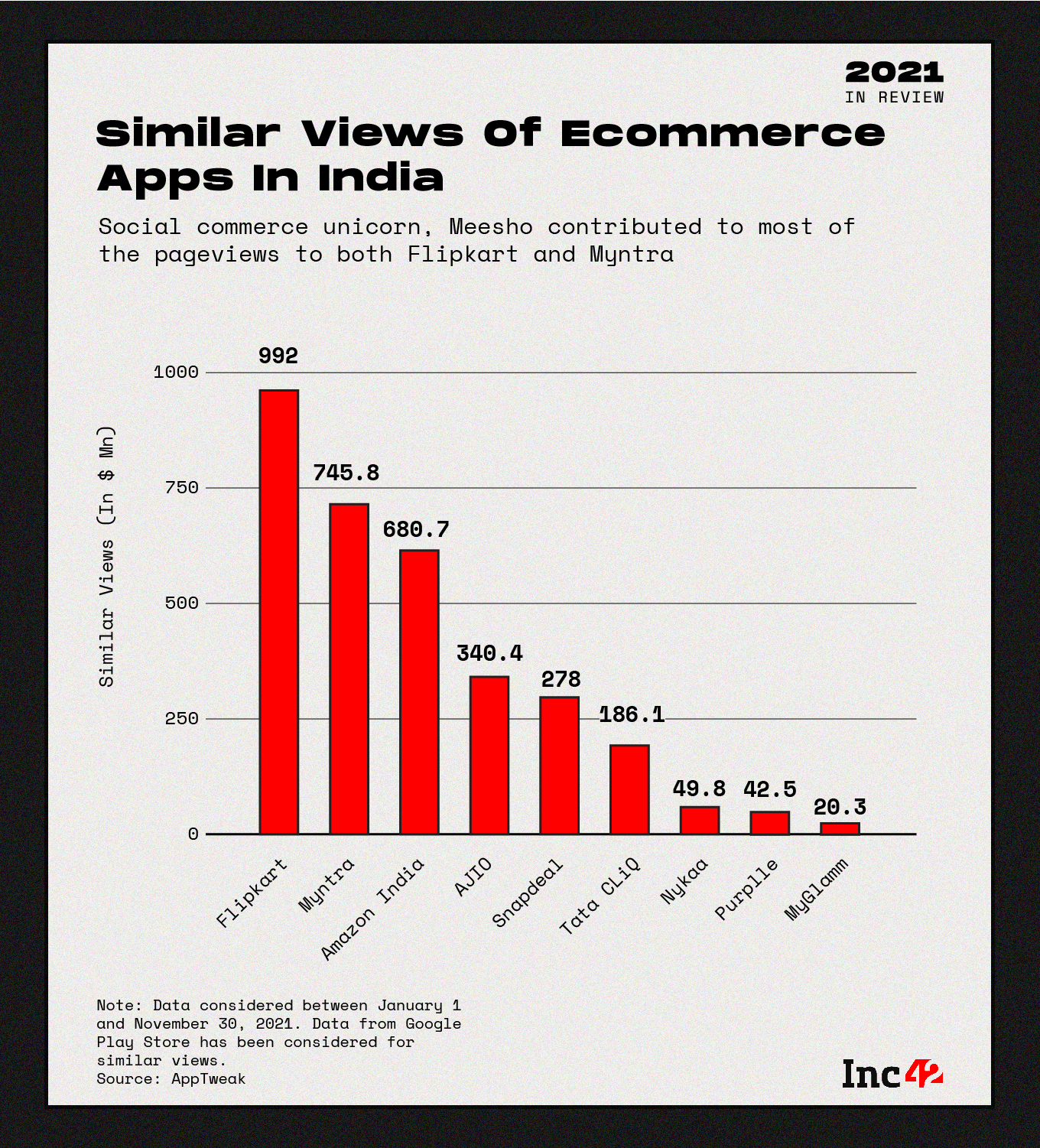 In 2021, ecommerce marketplaces have come up against a new breed of competitors. Startups have gone for a ‘house of brands’ model, which means attacking the market with a variety of private label brands each of which have high affinity to each other. Besides this social commerce has emerged as a force.


The House Of Brands Model

Ecommerce startups have turned to private labels due to the inherent higher margins in this model given the end-to-end control of operations, the higher scalability opportunity, the potential for incremental revenue, and grabbing brand equity across segments. 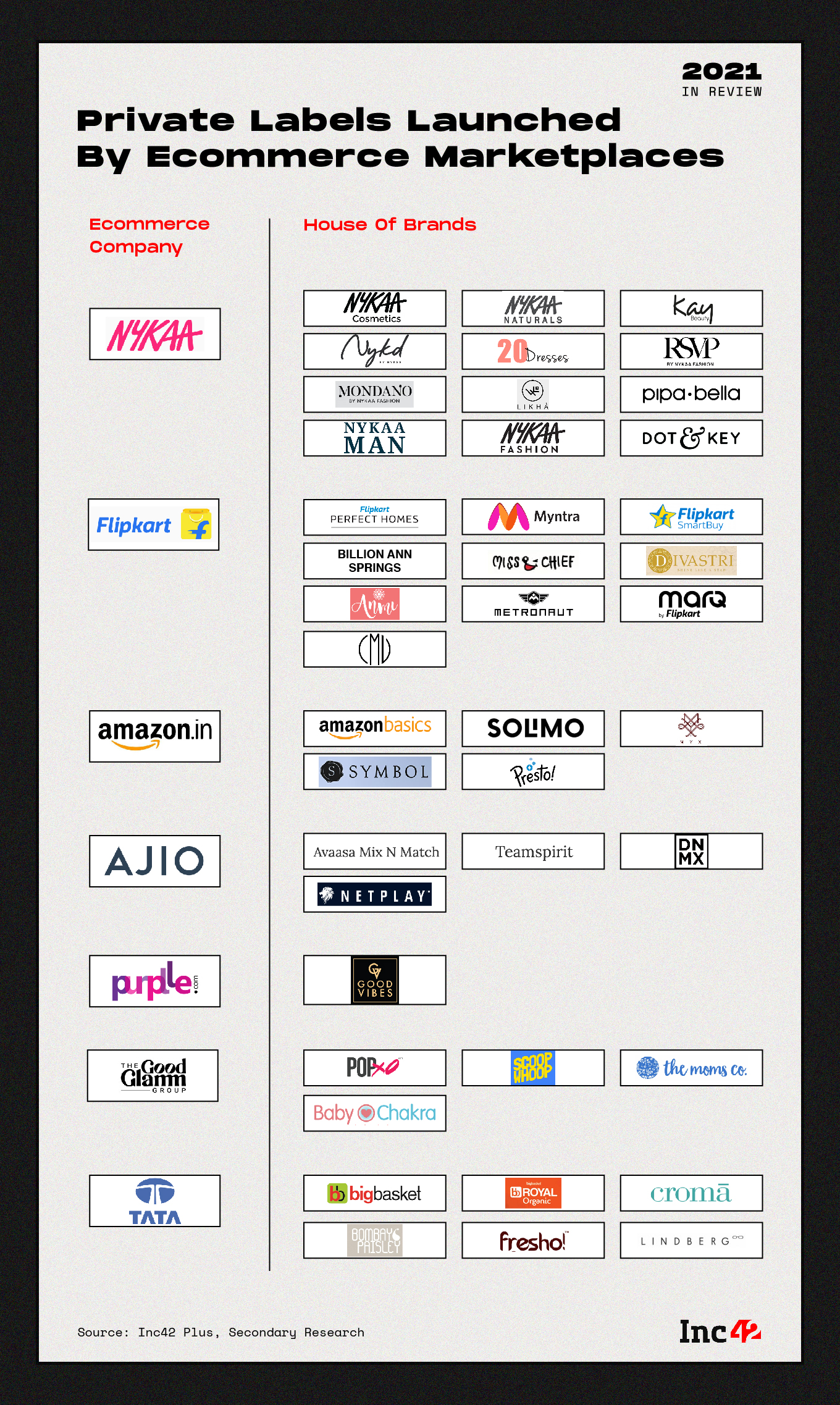 Ecommerce startups are shifting to the subscription model linked to loyalty programs to boost repeat purchases and create stronger connections with customers. In the D2C sphere, that means experimenting and testing the waters for models that seek to leverage the creamy layer of consumers through subscriptions.

Despite the number of startups and brands attempting to break through in the D2C subscription economy, it’s still early days. One thing that makes subscriptions compelling is the variety of models possible, as we have detailed here.

One of the most promising trends in the Indian ecommerce space, content commerce is driven by the consumption of short-form videos, the growth of influencer marketing, the rise in social media consumption and the rapid development of social commerce. Creators and influencers are also leveraging these platforms to reach new audiences and create their own ecommerce brands.

India’s live commerce space is booming and fast becoming a battleground for social media unicorns, ecommerce giants and upstarts, with the entry of Flipkart, Myntra and other bigwigs. Meesho, Bulbul, DealShare, SimSim, Trell, Chingari, Roposo are among the other major social commerce platforms in India.

Rise Of The Thrasio Model

Founded in 2018 by Carlos Cashman and Joshua Silberstein, Thrasio is  the decacorn that pioneered the concept of ecommerce roll-ups. It is said to have earmarked $500 Mn for acquisitions of digital-first brands in India. 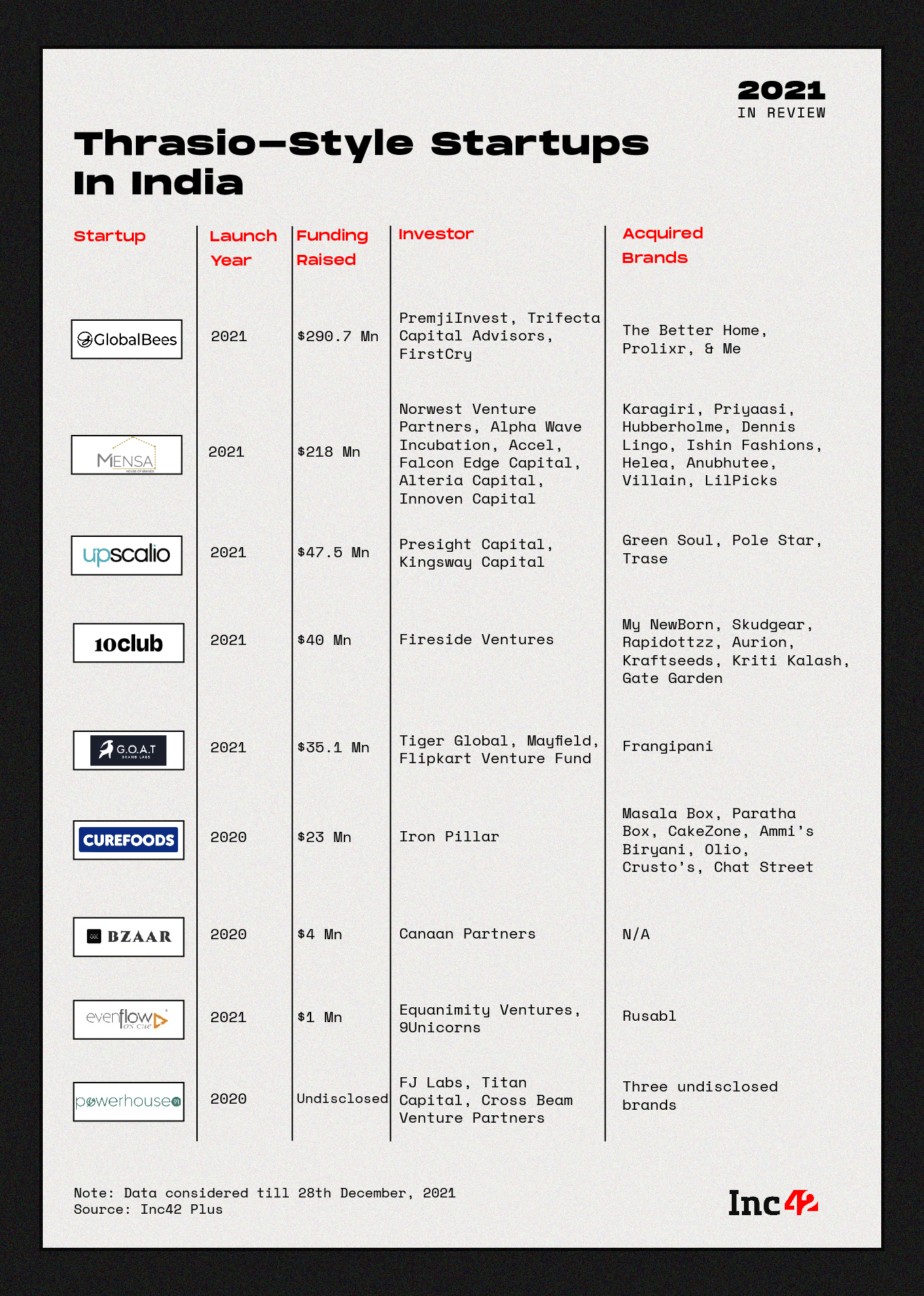 In India, this model has witnessed considerable interest from mainstream and debt investors. The Thrasio-style startups have raised a total funding of around $830.6 Mn till date. A dozen or so startups are currently operating in this space, including GlobalBees, Mensa, GOAT, 10Club and others.

India also witnessed its fastest unicorn in this space in the form of Mensa Brands. It became a unicorn in the six months since its inception after raising $135 Mn in Series B round in November 2021. Besides this, GlobalBees has also entered the unicorn club, bringing more eyes to this space.

For investors backing Thrasio-style ventures, the value lies in setting up house of brands and achieving efficiencies of scale with more integrated supply chains and more data on consumer behaviour across categories, helping them with better product development and market entry strategies. At least that’s the idea, but it remains to be seen how many of these platforms will manage to achieve profits and success in the Indian market.