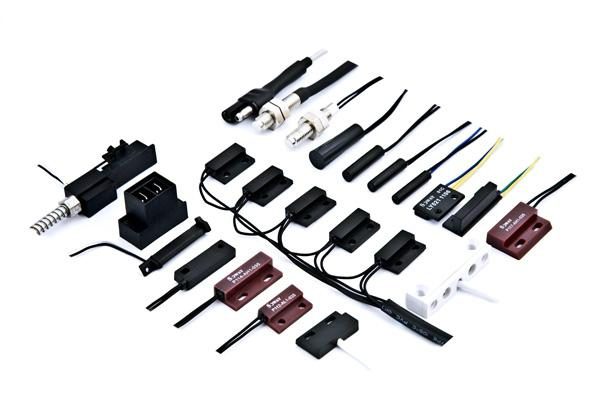 The magnetic reed switch is also known as an electromagnetic switch, operates like a bridge or a gate in order to control the flow of electricity in the circuit. It contains two or more ferrous reeds inside the small glass tube-like envelope that becomes magnetized. When the magnetic field is moved towards the switch reeds moves separately or together towards the switch. This switch is controlled by a magnetic field and does not require to operate manually like mechanical switches.

Reed switches are operated via magnetic field proximity, hence there is no mechanical wear and tear. They do not require voltage for functioning as a movement of reed depending upon the magnetic field. They are compact and protected from atmospheric corrosion as they are sealed in glass tubes. These are some of the advantages of magnetic reed switches.

Reed switches used for sensing and proximity applications in consumer electronics, automation, telecommunication, and various other sectors. It is also used in alarm systems for safety applications. It helps to indicate whether doors and windows are opened or closed. It offers a tamperproof system and accurate switch triggering. Magnetic reed switches are also used in laptops, tablets, smartphones for a proximity that switch on and switch off the device when the cover is placed or removed and reacts according to that action. In addition, they are also used in the refrigerator for detecting of opening and closing of the door and switch on and switch off light accordingly. They are also used for various sensing applications in the automotive sector.

By region, the magnetic reed switch market is categorized into North America, Europe, Asia Pacific, Latin America, and Middle East & Africa. Growing automotive sector, coupled with increasing manufacturing facilities for the automotive industry in countries in Asia Pacific region is expected to result in increasing demand for magmatic reed switch. In addition, growing adoption of the magnetic reed switch in the consumer electronics sector is anticipated to fuel its demand in countries such as China, India, and South Korea in this region in the near future.