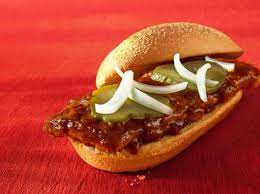 McDonald’s is giving one more reason to its customers to cheer for. The fast-food giant has announced that its tangy and tantalizing McRib is making a comeback. This comes at a time when McDonald’s is readying to celebrate the 40th anniversary of the cult classic menu item. McRib fans have been waiting for this day for all these years. The legendary McRib will be available from November 1 across all restaurants in the United States. McRib was introduced in the year 1981 in Kansas City. It made its debut at national in 1982. The sandwich was a success but did not gain overnight popularity. This was because most of the customers at that time were mad over Chicken McNuggets, which was introduced by the company just three years earlier. But the sandwich did manage to earn a cult over the years. Limited edition runs made it extremely popular and it shot to fame in the summer of 1994. This was when it was brought back to honor the theatrical release of John Goodman-starred film Flintstones.

The sandwich was proved to be a perfect companion to the live-action film. This helped it earn a permanent place on the menu of the fast-food giant. McRib remained there throughout the 90s and even early 2000s. The sandwich also made its appearance in France, Germany, and New Zealand. To cash in on the popularity of the sandwich, McDonald’s even introduced a McRib Jr. Sandwich. The unmistakable flavor of seasoned the boneless pork patty dipped in barbecue or BBQ sauce along with slivered onions and pickles on a home-style bun made it everyone’s favorite. Mike Bullington, Senior Archives Manager at McDonald’s, said that McRib is one of the most loved sandwiches and the masterminds behind the food innovation of the company during the 80s wanted to make a delicious sandwich that could be enjoyed during the colder seasons. “Whether you’re a loyal customer of McRib or first-timer, you are definitely going to enjoy this sandwich. In the last four decades, no one could even match its popularity. We have thousands of emails and tweets from fans that prove this,” Bullington said. The fast-food giant said that McRib’s icon status got solidified with the internet boom and the emergence of social media. Fans used social media platforms to get connected and tools like the ‘McRib Locator’ helped more and more people to join the frenzy.

Seasonal and limited-time offerings also helped the company to attract old as well as new customers. This is tried and tested technique and has helped several restaurants to make their favorite menu items even more popular. This is why McRib has a substantial following despite the fact that it has not been one of the items that are consistent in the menu of the fast-food giant. The hype around the return of this iconic sandwich got a boost from its annual return. This even resulted in fans coining a new phrase ‘McRib Season.’ The sandwich was put on a ‘Farewell Tour’ in 2005 and after that, the company repeated the tour every year for the next three years. By 2012, McDonald’s added McRib back in its menu, but as always, only temporarily. The company kept it off the menu for around many years before offering it for a limited period in October 2019 and then in December 2020. The wait is once again over as McRib Season is back. Customers can enjoy the delicious sandwich from November 1. The company is giving an option that allows users to order it even though the company’s app and McDelivery service. This will also help them earn points and unlock an additional free menu.