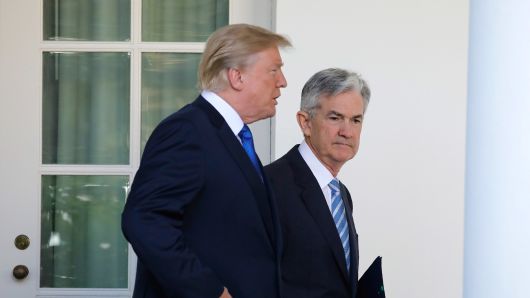 Reports Suggest That Trump Wants To Terminate the Chairman of Fed

President of the United States, Donald Trump wants to get rid of the Chairman of Federal Reserve, Jerome Powell. He wants to do so because Powell decided to raise the rates of interest. If Trump indeed goes ahead to go by what he has decided, then it is going to be an unprecedented action against the Independent Body, Federal Reserve, by a President. This could shake up the level of confidence in the US Financial System, which is already under a lot of pressure due to a vicious sell-off of equity. The frustration of the President has turned out to become intense in recent days as he has discussed his plan to get rid of the Fed Chairman on many occasions during that period.

The Dow Jones Industrial Average had suffered a fall of 7 percent this week. This turned out to be their worst week in 10 years. It was purely because of the fears that Fed in slowing down the economy unnecessarily as it raises their benchmark interest rate on Wednesday for the fourth time this year. Trump had cheered for Dow, while it was lying record high levels earlier in the year but now it is trading down 9 percent in 2018. The report even said that the advisers or Trump have issued warnings to him against a move like this, which has never ever been done by any President before. Still, it is not clear whether he has the legal authority to do so.

If Powell is removed, it would surely undermine that level of confidence as it will seem that the central bank was getting controlled by a politician, who might not always have the right vision towards the economy. The Fed has a double mandate to take care of, one to maximize employment and second is to make the inflation stable. The CEO of KKM Financial in Chicago, Jeff Kilburg said that if Trump indeed happened to remove Powell from his position or force his resignation, then it could cause the market to suffer a fall of a minimum of five percent. So, Trump might want to adopt a wait and watch approach as it is possible that the Fed could be a lot less aggressive with their rates hikes in the coming year.