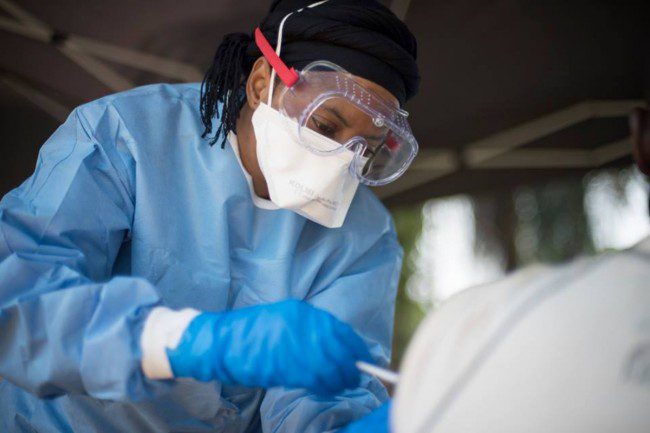 Health authorities are trying to contain a possible Ebola outbreak in the Democratic Republic of Congo as a new case has been detected in the eastern city of Butembo. The infected woman has lost her life due to the disease. The woman has been identified with the symptoms of the deadly virus in the town of Biena early this month. As per the report, she has contracted the virus through her husband who has been infected with the virus in a previous outbreak. The new case marks the beginning of Congo’s 12th Ebola outbreak. In 1976, the virus has surfaced for the first time near the Ebola River.

The new outbreak has been reported three months after the Congo authorities have declared the end of its 11th outbreak, which has been traced hundreds of miles away in the West Congo. The 11th Ebola outbreak has infected around 133 people and nearly 55 people have lost their life due to the deadly virus. Experts have said that the new outbreak has overlapped with an earlier outbreak in the eastern Congo, which has claimed more than 2200 lives in 2018. As per the experts, it has been the second deadliest outbreak of the Ebola virus in history.

Health experts have said that the emergence of more cases of the Ebola virus might have derailed the efforts to end the COVID19 pandemic. Around 23000 people have been infected with the SARS-CoV-2 virus in the Democratic Republic of Congo. The COVID19 pandemic has claimed around 700 lives so far across the country. A vaccine rollout program for COVID19 is going to begin in the first half of this year across the country. As per the scientists, the equatorial forests of Congo are the natural reservoir for the Ebola virus. The virus leads to vomiting and diarrhea. It spreads through bodily fluids. A study has shown that the virus can be found in the semen of male survivors for more than three years. The findings of this study have been released in the New England Journal of Medicine. The officials from the Health Ministry have said that a provincial response team has already been put in place.

This team will be accompanied by the National Response Team, which is going to visit Butembo soon. A severe Ebola disease can cause high fever and muscle ache followed by vomiting, diarrhea, skin eruptions, kidney and liver failure, and internal and external hemorrhage. In the past, extensive Ebola vaccination programs have helped end the pandemic. Around 40000 people have been given the vaccine under these vaccination programs. The outbreak, which has taken place in the Western Congo in 2018, has ended in June 2019. This outbreak has met with many huge challenges such as a deep-rooted conflict between armed groups, the world’s largest measles outbreak, and the emergence of COVID19.

Dr. Jason Kindrachuk, who is doing research on survivors of the 2014-16 West Africa Ebola outbreak has said that while health experts hope that early detection of an Ebola infection might help contain the outbreak, frequent Ebola outbreaks and the COVID19 pandemic has stretched the health system in Congo to its limit. He has said that the new outbreak will put far greater strain on the already exhausted health system. The World Health Organization (WHO) has said that it is not strange for sporadic cases to take place after a major outbreak. Dr. Matshidiso Moeti, who is the WHO regional director for Africa has said that the expertise and capacity of local health teams have been beneficial in identifying new cases of the Ebola virus. It has paved the way for a timely response. The officials from the WHO have been examining this new case and trying to find out the strain of the virus to identify its link to the previous outbreak.

Congo has been dealing with the conflict and distrust of government health workers for more than a quarter-century. People from Butembo city have already started asking why it has taken four days to declare the test result of the women who has died due to the virus. Experts from the WHO have said that the average mortality rate due to Ebola is nearly 50 percent but it can shoot up to 90 percent in certain outbreaks.