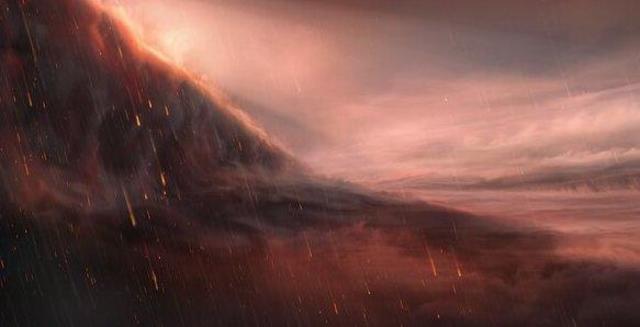 Finding new planets outside the solar system, or so-called exoplanets have shown unimagined worlds present in our universe. This time, researchers have discovered aa giant exoplanet, which includes extremely hot gases. Notably, dewdrops of iron rain from the sky of this planet at night time. The astronomers have dubbed the exoplanet as Wasp-76b, which revolves around a star present outside of the solar system. Researchers have found that the native weather conditions comprise temperatures up to 2,400C. Apart from this, the wind blows at more than a speed of 10,000 mph. Prof David Ehrenreich, an author of the study, said one could say this planet becomes rainy in the evening, but it showers iron.

The research published in the journal Nature Astronomy on Wednesday reveals the discovery of Wasp-76b. Scientists say the planet is tidally protected or locked; it means only one side of the planet faces the star every time. The aspect is the same as the way moon revolves around Earth. On the purported dayside, which faces the star, the temperature reaches as high as 3,140 degrees Fahrenheit. Christophe Lovis, a co-author of the study, said it is a type of world that they cannot imagine easily as they have not seen such a planet in the solar system. Researchers have used a very large telescope and the ESPRESSO instrument of the European Southern Observatory. They have also used an on-ground telescope present in Chile’s the Atacama Desert to monitor the planet.

While looking into the atmosphere of Wasp-76b, the researchers have spotted iron. Even more, they surmise that the intense temperatures of the dayside generate iron vapor. Those temperatures are hot enough to transform metal into steam and particles into atoms. Fast winds ferry this to the far side or nightside, which comparatively has cooler temperature hover over 2,200 degrees Fahrenheit. Later, the iron steam condenses into clouds, which eventually results in iron rain. Researchers say this is the reason why they have noticed metal in the atmosphere of the planet. The discoveries, released in the journal Nature, are the most recent to offer new perceptions into the wide range of planets present beyond the solar system.