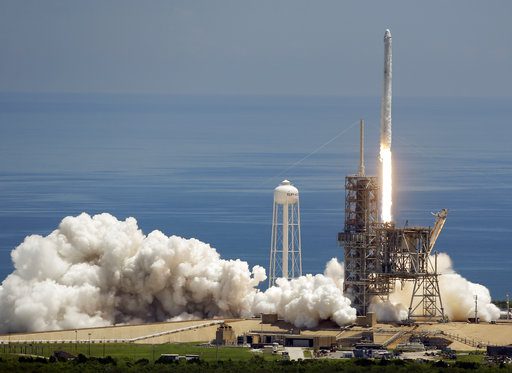 After a drought of around two-month, SpaceX has launched Dragon cargo ship into orbit. The cargo ship, with around 4,300 pounds of equipment and other supplies, was launched by Falcon 9 rocket. This was SpaceX’s 23rd launch to deliver supplies to the International Space Station. The 215 feet tall Falcon 9 launcher roared into the sky from pad 39A at NASA’s Kennedy Space Center. The Dragon cargo ship on board the recycled Falcon rocket carried 4,300 pounds of equipment and experiments for seven astronauts staying at the ISS. The supplies also included ice cream and avocados for astronauts.

The launch was initially delayed by 24 hours because of the stormy weather. The first stage of the recycled Falcon rocket made its fourth flight this time. It steered away from the Dragon Cargo out of the thick lower atmosphere. The second of the rocket then carried the vehicle to space. After the separation, the first stage rocket restarted the reverse engine and landed back on SpaceX’s third sea-going landing pad. With this, the company has so far managed to recover 90 boosters. This was the 67th booster that landed at sea. SpaceX director of Dragon mission management Sarah Walker said that the new barge will be able to secure the rocket to the ship itself.

Apart from food items for astronauts, the vehicle carried some science investigations to the ISS. There are some experiments to study therapies as well. For example, there is a device that will be used to study eyesight problems that can be caused because of the prolonged exposure to microgravity. There are three Girl Scout experiments onboard Dragon Ship. This is being done to encourage the interest of young women in science. The Dragon will most probably remain attached to the ISS until the end of the next month. By then, supplies and equipment will be offloaded. It will then return to the earth with experiments and footage shot from the high-resolution 3D camera system.